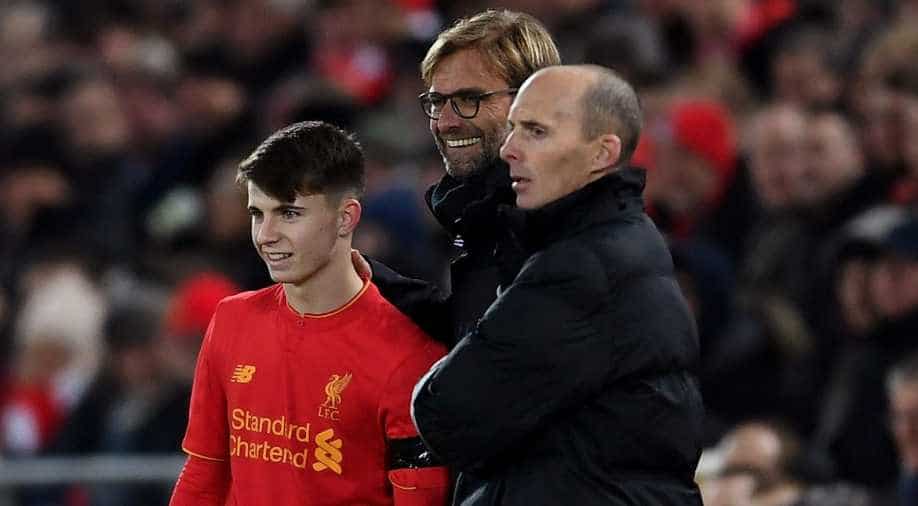 Substitute Ben Woodburn of Liverpool stands alongside Jurgen Klopp manager of Liverpool during the EFL Cup Quarter-Final match between Liverpool and Leeds United at Anfield on November 29, 2016 in Liverpool, England. Photograph:( Getty )

Liverpool starlet Ben Woodburn made history as the teenage striker became the club's youngest ever goalscorer in Tuesday's 2-0 win over Leeds in the League Cup quarter-finals.

Aged 17 years and 45 days, Woodburn enjoyed a moment to remember forever in the 81st minute at Anfield when he fired home in front of the famous Kop End to eclipse the previous record set by Michael Owen, who was 17 years and 143 days old when he scored against Wimbledon in May 1997.

Cheshire-born Woodburn, who recently signed a long-term contract with Liverpool, is a Wales Under-19 international, but he still remains eligible to play for England at senior level.

Klopp`s side are through to the League Cup semi-finals for the third successive year thanks to Woodburn and Divock Origi.

Klopp has now won seven of his nine League Cup games with Liverpool, who hope to lift the trophy for the ninth time after losing to Manchester City in the final last term.Before kick-off, Liverpool`s Brazilian captain Lucas and his team-mates, all wearing black armbands, stood for a minutes` silence following the plane crash that killed 71 people, including members of the Brazilian Chapecoense team.

Second tier Leeds, whose last League Cup semi-final appearance was in 1996, should have been ahead early on when Hadi Sacko broke the offside trap and saw his shot saved by Simon Mignolet.

Then, in the 76th minute, Alexander-Arnold whipped in a cross from the right and Belgian striker Origi stretched to guide the ball home at the near post for his fourth goal of the season and third in the League Cup.

Woodburn came on in the 67th minute and his dream came to true when he smashed home a flowing move involving Origi, Mane and Wijnaldum in the 81st minute.