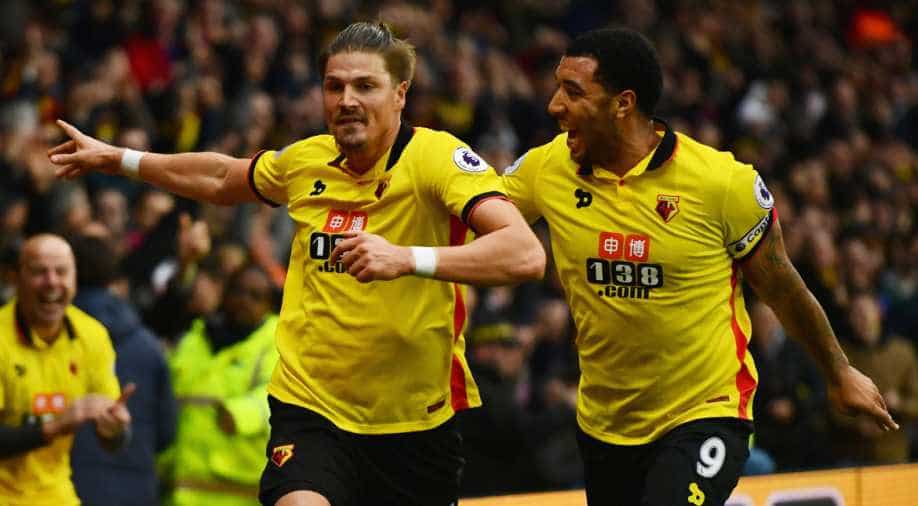 Watford started with players of 11 different nationalities in their line-up. Photograph:( Getty )

Italy international Stefano Okaka scored either side of halftime to give Watford a 3-2 Premier League win over Everton on Saturday, their first victory over the Merseyside club in any competition since 1987.

Watford, who started with players of 11 different nationalities in their line-up, went behind in the 17th minute when Romelu Lukaku scored from close range for Everton after Gareth Barry lobbed the defence.

The goal was the Belgian's eighth in the league this season but the lead was short-lived, Okaka equalising in the 36th with a back-heeled flick at the near post from Nordin Amrabat's cross.

Okaka followed up on his first Watford goal by heading in the Hornets' third from a corner in the 64th after Austrian Sebastian Prodl had headed in his first league goal of the season from Jose Holebas's free kick.

Lukaku headed in his second of the afternoon with four minutes of normal time remaining but Watford hung on to go seventh in the standings on 21 points and ahead of ninth-placed Everton.

Okaka's goals were his first in the Premier League since May 2010, when he was on loan at Fulham. A summer signing from Anderlecht, he was making only his second start for Watford.

"Stefano Okaka had to wait mainly because of injury but he has shown how important he is for the team," manager Walter Mazzarri said.

Apart from the 11 nations represented in the starting lineup, Watford have now also had 11 different goalscorers in the league this season - a feat that only Liverpool can match.

They are not, however, the first Premier League team to have such a diverse team -Manchester United also fielded players from 11 different countries against Stoke City in 2011.

Everton, sliding down the table after a bright start to the campaign and now with one win in 10 games, have conceded 11 goals in their last four away fixtures.