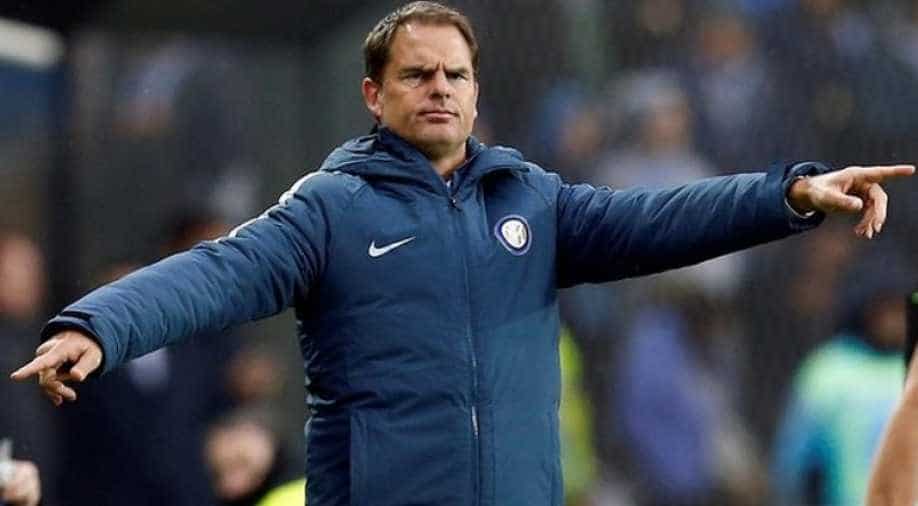 Inter Milan fired Dutchman Frank de Boer as coach on Tuesday after less than three months in charge during which the former European champions lost seven of their 14 competitive games.

Inter, who dropped to 12th in the Serie A table following Sunday's 1-0 loss to Sampdoria, said youth team coach Stefano Vecchi would be in charge of the team for Thursday's Europa League match at Southampton.

"The club thanks Frank and his staff for the work they have undertaken at the and wish them the best for the future," Inter, who have lost four of their last five league games, said in a statement.

Inter, traditionally one of Italy's three biggest clubs alongside Juventus and city rivals AC Milan, appointed the 46-year-old De Boer on Aug. 9, two weeks before the start of the season, after Robert Mancini left by mutual consent.

The club said that an announcement on De Boer's replacement would be made later. Italian media reported that Stefano Pioli, the former Lazio coach, was the favourite.

De Boer was Inter's eighth coach since Jose Mourinho left in 2010 after winning the Champions League, Serie A and Coppa Italia treble.

Inter are enduring their fifth successive season without Champions League football and have won one trophy since Mourinho's departure, the Coppa Italia in 2011.

Former Netherlands defender De Boer had no previous experience of playing or coaching in Italy. He had previously been in charge of Dutch side Ajax Amsterdam for six years during which he won four league titles.

His overall record of five wins, two draws and seven defeats included shock losses to Hapoel Beer Sheva and Sparta Prague in the Europa League and at home to Cagliari in Serie A.

Inter were sold to a consortium led by Indonesian business tycoon Erick Thohir in October 2013 by Massimo Moratti, who had owned the club since 1995.