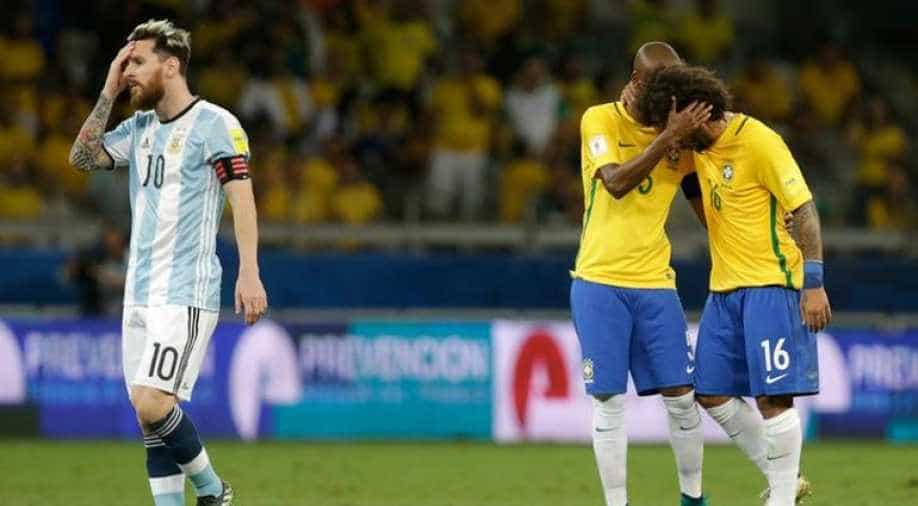 Argentina's Lionel Messi, who returned to the side after three games out injured, was anonymous in a match lit up by brilliant moments from the home side. Photograph:( Reuters )

Brazil dealt Argentina's hopes of reaching the 2018 World Cup finals a serious blow on Thursday with a resounding 3-0 win that dropped the world's top ranked side into sixth place in the 10-team South American qualifying group.

First half goals from Philippe Coutinho and Neymar were followed by a third from Paulinho after 58 minutes to sink the Argentines and extend their winless run to four games.

The result means Brazil remain top of the group with 24 points from 11 games.

Argentina are sixth on 16 points, with the top four teams qualifying automatically for the finals in Russia and the fifth-placed side going into a play-off with the Oceania winners.

"Today we imposed ourselves, the fans helped from the first minute and we leave here very happy," Coutinho said in a pitchside interview.

Argentina's Lionel Messi, who returned to the side after three games out injured, was anonymous in a match lit up by brilliant moments from the home side.

Brazil took the lead after 24 minutes when Neymar slipped the ball to Philippe Coutinho on the left with the deftest of touches and the Liverpool midfielder hammered an unstoppable drive into the top corner of the net.

The Barcelona striker was lucky not to concede a penalty after he handled in the box 12 minutes later but he was always dangerous at the other end and he doubled Brazil's lead just seconds before half time when he coolly slotted home after taking a defence-splitting pass from Gabriel Jesus.

Paulinho sealed it 13 minutes into the second period when the midfielder charged into the box between defenders and poked home a cross from Renato Augusto.

Brazil were dominant in a rampant second half and could have scored more with Neymar and substitute Robero Firmino both coming close.

In the evening's other games, Peru got four goals in the second half to beat Paraguay 4-1 away in Asuncion, while Josef Martinez became the first Venezuelan to score a hat trick in World Cup qualifiers in the 5-0 win over Bolivia.

Earlier, Colombia drew 0-0 at home to Chile and stay in third, while Uruguay beat Ecuador 2-1 to remain second, a point behind Brazil.