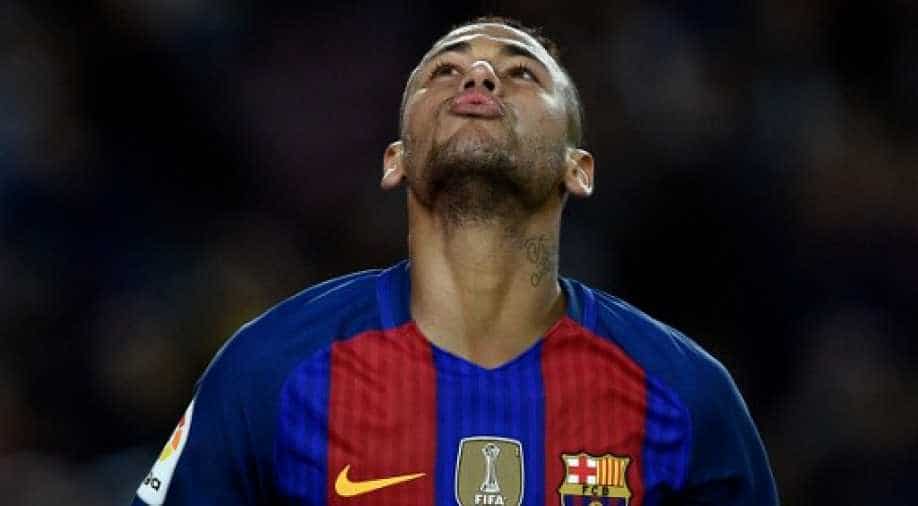 Neymar (in picture) had a great chance to win it for Barcelona in the dying seconds of the game but for Malaga keeper Carlos Kameni to produce an incredible save. Photograph:( AFP )

Barcelona paid a heavy price for the absence of Lionel Messi and Luis Suarez as nine-man Malaga held out for a 0-0 draw at the Camp Nou on Saturday.

Carlos Kameni produced an incredible 94th minute save from Neymar after Diego Llorente had been sent-off midway through the second-half.

Juan Carlos also then saw a straight red in the sixth minute of time added on, but Malaga hung on as Barca blew the chance to go top of the table.

The champions now trail leaders Real Madrid by a point ahead of their trip to Atletico Madrid later on Saturday.

Five-time World Player of the Year Messi was ruled out just hours before the game due to illness, whilst Suarez was suspended.

"They are two of our most decisive players. They make the difference in the most important part of the pitch, but that can't serve as an excuse," said Barca's captain for the day Sergio Busquets.

In the absence of Suarez, Paco Alcacer was handed a rare start, but his search for a first Barca goal continues as he failed to make any meaningful impact.

Without his usual two strike partners, the focus was on Neymar to break down the mass ranks of Malaga defence.

The Brazilian fired into the side-netting inside the first 10 minutes, but Barca's bright start quickly fizzled out.

Rafinha's drive produced Kameni's only serious save of the first 45 minutes.

Barca continued to dominate possession without a cutting edge at the start of the second period and should have been caught out on the counter-attack.

Carlos had the best chance of the game just before the hour mark when he rounded Barca 'keeper Marc-Andre ter Stegen but fired into the side-netting with the goal gaping.

Malaga had to see out of the final 21 minutes with 10 men when Real Madrid loanee Llorente cynically chopped down Neymar and was shown a straight red card.

Yet, even with a man advantage, Barca badly missed the creativity of Messi and injured captain Andres Iniesta as they resorted to launching cross balls into Gerard Pique, who moved forward from central defence to act as an emergency forward.

Substitute Ivan Rakitic headed inches wide, whilst Pique also had a goal ruled out for offside after Andre Gomes had struck the bar.

Earlier, Sevilla moved up to third as they produced a stunning fightback from 2-0 down to win 3-2 at Deportivo la Coruna.

Sevilla's demons away from home looked set to strike once more when Ryan Babel's first-minute opener and a wonderful individual effort from Florin Andone handed struggling Deportivo a 2-0 lead.

However, in-form French midfielder Steven N'Zonzi launched the comeback with a vital goal just before half-time to give Sevilla hope.

The visitors had to wait until three minutes from time to level when Vitolo fired home at the back post despite Przemyslaw Tyton's best efforts.

And Tyton was beaten again deep into stoppage time when he saved Nico Pareja's first effort, but Mercado followed up to blast home the rebound.