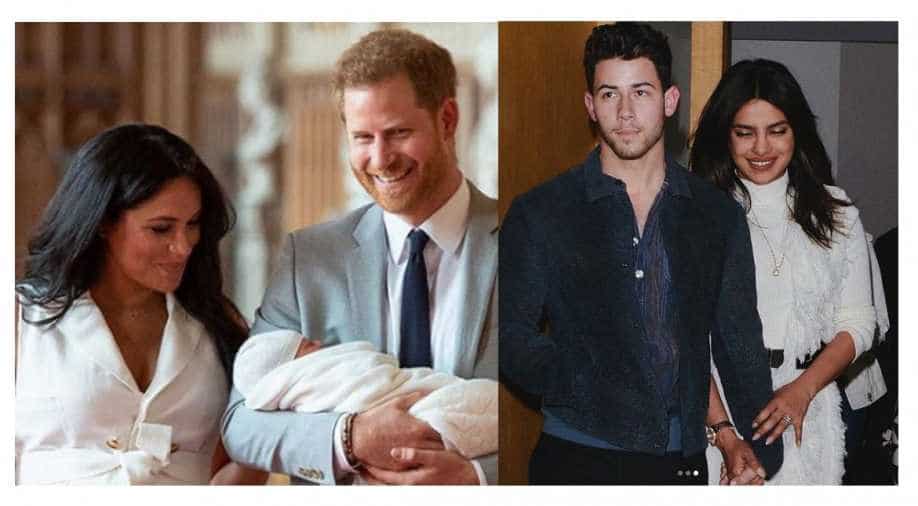 Priyanka Chopra and Meghan Markle with their partners Photograph:( Twitter )

Baby Archie has been seeing a lot of high-profile visitors ever since he has been born as just recently Serena Williams too paid them a visit.

We saw some photos of Priyanka Chopra and Nick Jonas in London and thought there was something more to it. Turns out we were right as the couple were in the city to pay a visit to Meghan Markle’s baby with Prince Harry, Archie Harrison Mountbatten-Windsor.

The Duchess and Duke of Sussex reportedly hosted Priyanka and Nick, for whom it was the first visit to the royals since Meghan gave birth.

See pictures of Priyanka and Nick in London this time:

Priyanka and Nick reportedly showered the royal baby with some precious gifts from their most preferred jewellery store, Tiffany & Co. Among the many gifts, it is said that they also gave a sterling silver bubble blower worth $250.

The meeting puts all feud rumours between the two friends to rest. It started when Meghan did not attend Priyanka’s wedding in India to Nick Jonas even though the latter attended the royal wedding. It also spiked when Priyanka was nowhere to be seen in New York when Meghan threw a baby shower function for her friends.

Baby Archie has been seeing a lot of high-profile visitors ever since he has been born as just recently Serena Williams too paid them a visit. She sparked rumours of being the baby's godmother.

Meanwhile, on the work front, Priyanka will be seen with Farhan Akhtar in ‘The Sky is Pink’.