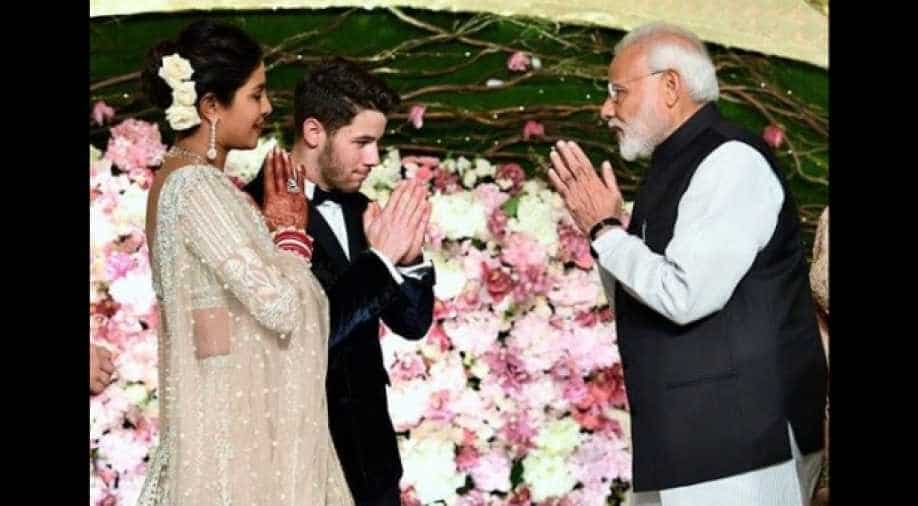 Congratulations @priyankachopra and @nickjonas. Wishing you a happy married life.

Making the night special for newlyweds, Prime Minister Modi attended their wedding reception in Delhi on Tuesday. He congratulated the couple and gifted a rose to the couple as a token of best wishes.

Sharing a snap from the reception, The Prime Minister wished the couple, writing,"Congratulations @priyankachopra and @nickjonas. Wishing you a happy married life."

In the candid photo, all three are seen greeting each other with a namaste.

Priyanka and Nick turned hosts at their grand wedding reception, held at the Taj Mahal Palace hotel in the national capital.

The newlyweds looked their stylish best at the celebrations. While Priyanka was oozing radiance in a stunning sequin lehenga by Falguni-Shane Peacock, Nick opted for a more formal look, donning a black velvet tuxedo with matching shoes.

Priyanka and Nick tied the knot on December 1 and 2 in two elaborate ceremonies at Jodhpur`s Umaid Bhawan Palace. They first got hitched in a Christian wedding ceremony which was even more special as it was officiated by Nick`s father, Paul Kevin Jonas Sr. On the second day, they got married as per Hindu wedding rituals.