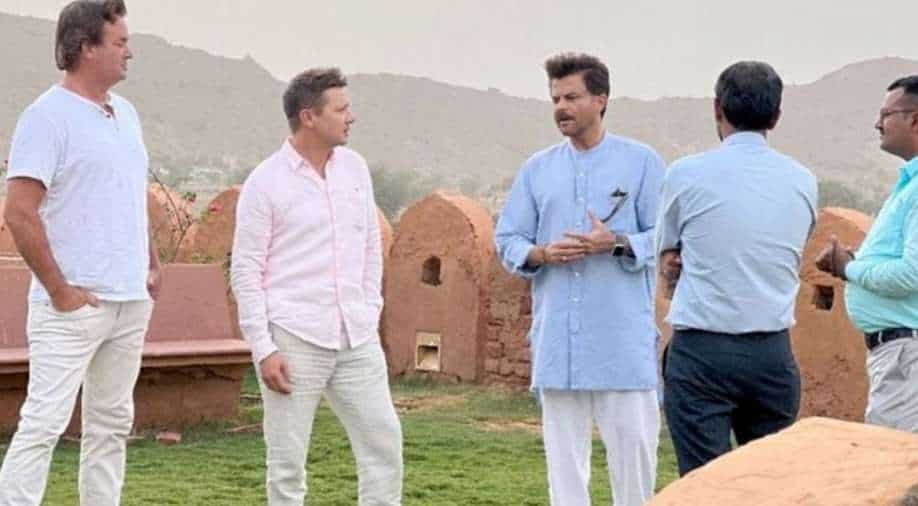 The actor is reportedly shooting for a new project, rumoured to be a web series, in Rajasthan along with Bollywood star Anil Kapoor.

Marvel's 'Hawkeye' is in India. Actor Jeremy Renner, who is best known for his role as one of the Avengers in Marvel Cinematic Universe, is in India.

The actor is reportedly shooting for a new project, rumoured to be a web series, in Rajasthan along with Bollywood star Anil Kapoor.

Though there has been no confirmation from either Kapoor or Renner's spokespersons, several posts on social media have indicated that the actors will be seen in a project together.

Renner arrived in India last week and on Tuesday, the Hollywood star, who is currently in Alwar, Rajasthan, shared a picture on his Instagram account, in which he was seen playing cricket with children.

On Wednesday, several fan page accounts of Renner posted videos and photos of him shooting with Kapoor, with crew members and a few children dressed in school uniforms reportedly at a government-run senior secondary school in Laxmangarh Fort, Alwar.

In one of the fan posts, Kapoor is seen dancing on a stage to the popular track "Gallan Goodiyaan" from his 2015 movie 'Dil Dhadakne Do' and Renner, who was standing with the crowd, was enjoying the actor's performance.
Reports stated that the Hollywood star is shooting for 'Rennervations', a new non-scripted Disney+ series.

Both Renner and Kapoor had previously starred in Tom Cruise's 2011 movie 'Mission: Impossible - Ghost Protocol', though they did not share the screen space with each other.
Kapoor has worked on several international projects such as award-winning movie 'Slumdog Millionaire', helmed by Danny Boyle, 'Mission Impossible - Ghost Protocol' and TV series '24'.
Renner, 51, most recently appeared in Marvel/Disney+ superhero series 'Hawkeye'.