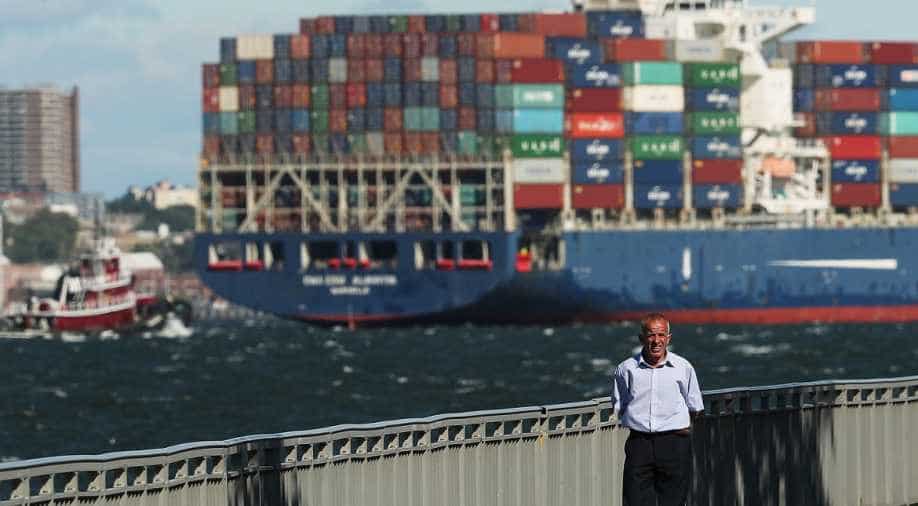 China is the world's biggest trader in goods and its performance affects partners from Australia to Zambia, which have been battered as its expansion has slowed. Photograph:( Getty )

The result, which missed forecasts, comes as the country's export-oriented companies see their margins squeezed by rising labour costs and increasing competition from southeastern Asian countries, despite a falling yuan currency.

Overseas shipments fell 7.3 per cent year-on-year, while imports also dropped 1.4 per cent, with both coming in below expectations in a survey of economists by Bloomberg News.

China is the world's biggest trader in goods and its performance affects partners from Australia to Zambia, which have been battered as its expansion has slowed to levels not seen in a quarter of a century.

With exports totalling $178.2 billion and imports $129.1 billion the trade surplus dropped to $49.1 billion in October.

"The current pace of global growth is likely to be as good as it gets for the foreseeable future."

Though the yuan currency`s value has slid to a series of six-year lows against the greenback in recent weeks, making Chinese goods cheaper for trade partners, it has not been enough to lift exports into positive territory.

The yuan weakened further Tuesday after the People's Bank of China said the country's foreign exchange reserves dropped nearly $46 billion in October, their second-largest decline this year as capital outflows eat into the world`s largest stockpile.

While Tuesday's trade figures disappointed, analysts with ANZ said they suggested that external demand had "not worsened significantly" despite earlier data on factory activity that pointed to a larger decline.

Beijing is seeking to transition the economy away from being the world's factory floor for cheap goods to supplying the country's growing consumer needs.

Authorities have set a growth target of 6.5 to 7 per cent for the year, which they are on track to meet thanks to loose credit, a red-hot real-estate sector, and fiscal stimulus spending on infrastructure.

Government figures last month showed growth was steady at 6.7 per cent in the third quarter, a sign of stabilisation after years of slowing.

Growth momentum should be relatively stable through the rest of the year, Zhao Yang of Nomura said in a note, while high home prices will limit the room for further policy easing.

US economic data, though "there are still uncertainties on the US' trade policy after the presidential election".

Zhang Yanbing, an analyst at Zheshang Securities, told AFP that market players ignored the weak data because "all of them have their eyes fixed" on the Trump-Clinton race.