Women?s March on Washington: More than 200,000 protesters across America expected to denounce Trump 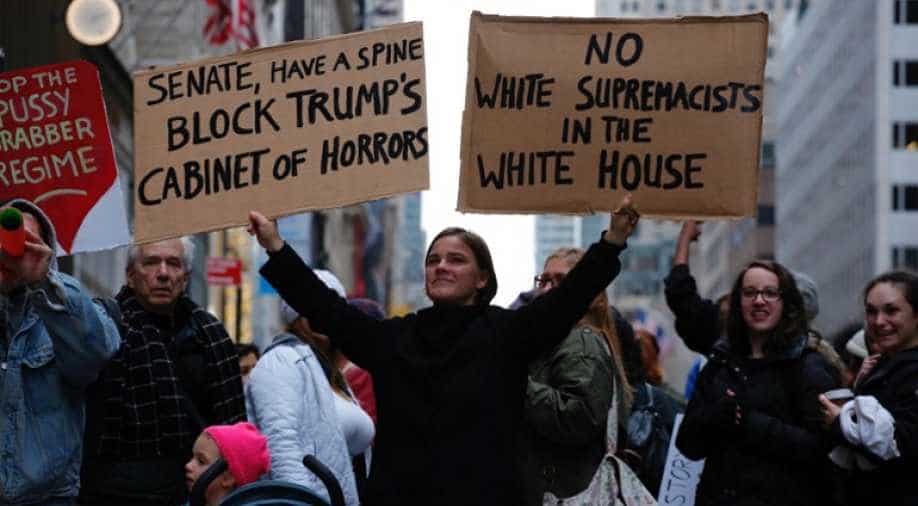 The march is not restricted only to females and is expected to be one of the largest demonstrations in American history. Photograph:( AFP )

The day after Donald Trump will be sworn as the President of the US, more than 200,000 protestors from across America are expected to march all the way to Washington DC to denounce Donald Trump.

For those who want to participate but cannot make it to DC, more than 350 "Sister Marches" are planned in other American cities.

The march now has almost 200 progressive groups, signing on as supporting partners.

The "Women’s March on Washington" started with a Facebook post day after the results of the US presidential elections were declared.

The issues these groups represent are as varied as the environment, legal abortion, prisoners’ rights, voting rights, a free press, affordable healthcare, gun safety, racial and gender equality and a higher minimum wage.

The march is not restricted only to females and is expected to be one of the largest demonstrations in American history.

“A march of this magnitude, across this diversity of issues has never happened before. We all have to stand together as a force no one can ignore,” said Kaylin Whittingham, president of the association of black women attorneys.

"The Women's March on Washington will send a bold message to our new government on their first day in office, and to the world that women's rights are human rights," the march's mission statement reads.

"We stand together, recognizing that defending the most marginalized among us is defending all of us."

Many high-profile artists are also expected to be in attendance including America Ferrera, Amy Schumer, Uzo Aduba and Zendaya, all who have also posted on social media about the march.

“If there was ever a time to stand together, to stand proud and loud, it’s under a president who won an election on a message of hate and division,” Linda Sarsour, a national chair of the march, wrote last week in a Women’s Media Center essay.

The prepation for the march invited a lot of controversies also for itself.

Earlier the march was named the "Million Women March", but after some mild public backlash the organisers decided to distance their event from the 1995 march called the "Million Man March", so they changed it to the "Women's March on Washington".

Then the founding organizers said they realised they did not represent America’s diversity. So they recruited a trio of New York City-based minority activists to their national leadership.

Earlier this week, an anti-abortion feminist group was dropped as an official march partner. March representatives said they made an “error” in including the organisation and have been supporters of abortion rights “from day one".