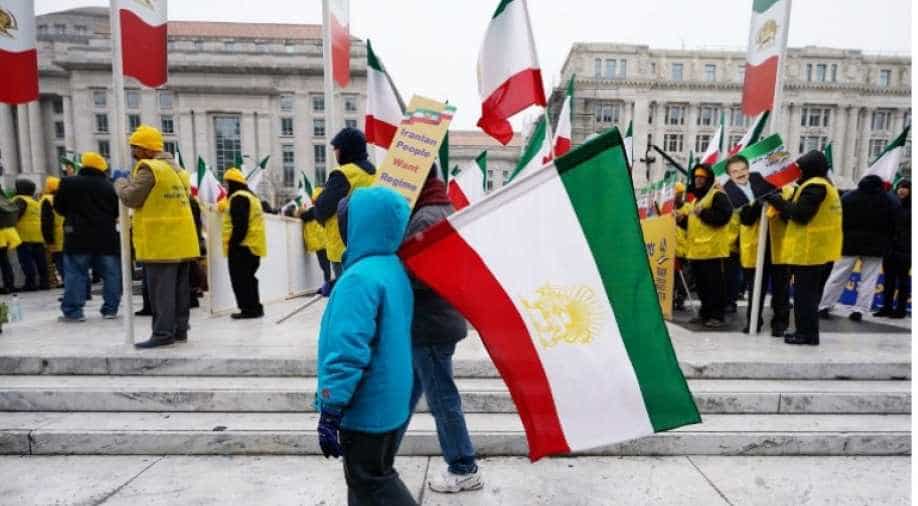 The Organisation of Iranian-American Communities holds a rally and march in support of 'the nationwide uprisings in Iran for regime change'. Photograph:( AFP )

The administration of US President Donald Trump consistently blasts a lack of freedoms in Iran and its 'destabilising' influence on the Middle East.

Hundreds of people turned out in Washington Friday demanding regime change in Iran and denouncing "atrocity toward the people" under Tehran's regime.

Protesters waved Iranian flags as they chanted for "regime change now" -- with some holding portraits of Maryam Rajavi, leader of the People's Mujahedin, an Iranian opposition group banned in the country.

"The regime inside Iran is doing so much atrocity toward the people. Iran in whole has been destroyed by this regime," said Michael Passi, an Iranian-American engineer.

"There are a lot of executions, a lot of tortures and a lot of export of terrorism by this regime," he alleged.

"We want separation of religion and the state," added Mina Entezari, an Arizona-based designer who was a political prisoner in Iran for seven years. "We want freedom for people."

The administration of US President Donald Trump consistently blasts a lack of freedoms in Iran and its 'destabilising' influence on the Middle East.

A firm adversary of the Islamic republic, he has reimplemented harsh economic sanctions -- but Washington insists it is not pushing for regime change, only a change to Iran's policy in areas including missile development and support for militant groups.

"I'm 100 per cent behind President Trump's policy," Passi said. "The only language that this Iranian regime understands is a language of force."