War disrupts it all: It will take $180 billion to rebuild Syria 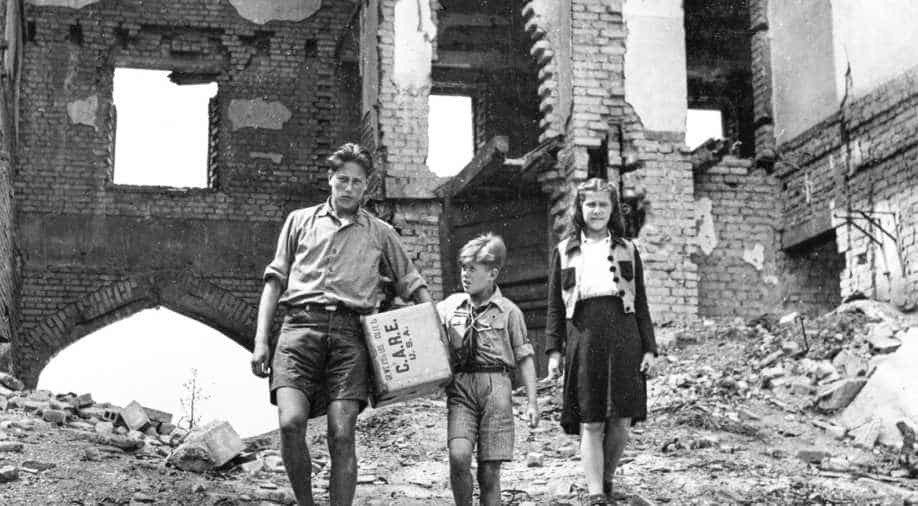 An unidentified man, along with boy and girl, walk over the rubble in the shell of a building with a CARE (Cooperative for American Remittances to Europe) package, 1940s or 1950s. CARE was a humanitarian agency, its acronym later changed to Cooperati Photograph:( Getty )

In 1945, West Germany was 400 million cubic metres of rubble. Almost 80 per cent of historical buildings in the main cities of Germany were levelled, some were restored later and some lost forever. The trains were not working, not enough food, and almost 70 per cent of the houses were destroyed, forcing people to stay in refugee camps once the war ended. Many men died in the war, severely impacting the labour force required to rebuild the country.

It is difficult to peg the exact economic cost of rebuilding Germany after the war, but the Marshall Plan, also known as the European Recovery Project, gives a partial figure. Beginning in 1949, the Marshall Plan provided $1.4 billion to Germany to promote economic recovery. According to a 2006 report by the Federation of American Scientists, the United States provided financial assistance to Germany for rebuilding its cities from 1946-1952, an amount equivalent to $29.3 billion, as per dollar conversion rates in 2005.

The reconstruction of Germany lasted up to the 1980s — almost 35 years. Even as late as the 2000s, certain parts of Germany were still being rebuilt, with Berlin having maximum damages.

It takes centuries for an economy to evolve. People from other countries migrate, and settle in a country, bringing new traits of commerce with them. With time these traits become a part of the settled country, enriching its economy, and building it further. Several civilisations contribute to building a country, its economy, and help it reach where it stands at a given point of time.

But one war disrupts it all and sets a country back by generations. In September 2012, Syrian government forces shelled the rebel forces, bankrupting 40,000 traders in the city of Aleppo overnight.

For the past five years, Syria has been witnessing war between Islamic militants and government forces. The population, as well as the GDP (gross domestic product) of Syria, has shrunk miserably since the inception of war, with the maximum damage being borne by the manufacturing and crude oil sectors. According to the data released by the Syrian government, the Syrian pound has lost about 80 per cent of its value since the conflict began.

In February 2016, Syrian President Bashar Assad put the estimated economic loss to Syria from war at $200 billion. According to World Bank President Jim Yong Kim, rebuilding war-ravaged Syria may cost as much as $180 billion.

Aleppo, once envied for its trade and commerce, is now reduced to rubble. A World Bank-led preliminary assessment of damage in six cities of Syria — Aleppo, Dar'a, Hama, Homs, Idlib, and Latakia — over seven sectors — housing, health, education, energy, water and sanitation, transport and agriculture — estimated a cost-of-repair bill of $ 3.6 billion to $4.5 billion as of 2014-end.

Even the countries bordering Syria such as Turkey, Lebanon, Jordan and Egypt are suffering from the spillover effects of war. The World Bank estimates that the influx of more than 630,000 Syrian refugees has cost Jordan over $2.5 billion a year. This amounts to 6 per cent of Jordan's GDP and one-fourth of its government’s annual revenue.

War is the greatest negative disruptor for any economy making all its growth over the years futile. War does not end in a day or even a year. It continues for several years and puts the economy in a freeze. Post World War II, it took 35 years and several billion dollars to rebuild Germany, Syria has a tougher road ahead.