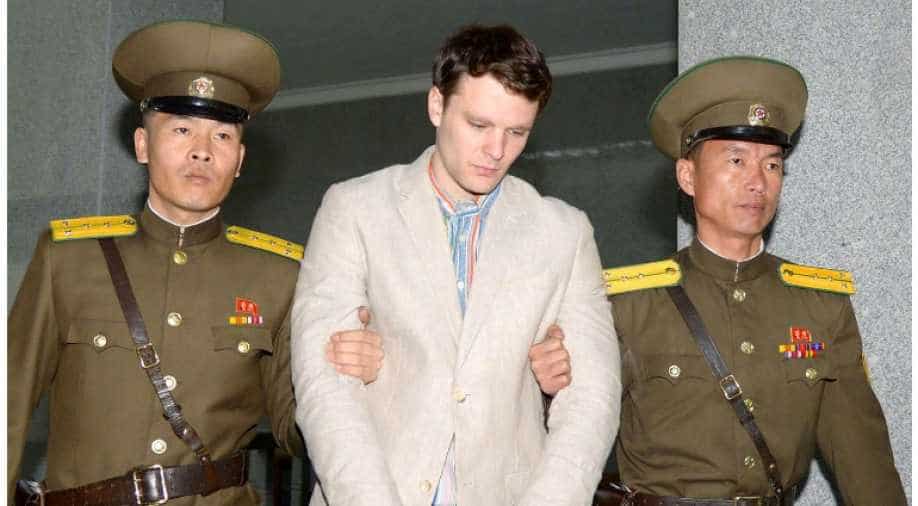 FILE PHOTO: Otto Frederick Warmbier, a University of Virginia student who was detained in North Korea since early January, is taken to North Korea's top court in Pyongyang, North Korea, in this photo released by Kyodo March 16, 2016. Photograph:( Reuters )

Beryl Howell, the chief judge of the US District Court for Washington, DC, awarded $501,134,683.80 to the family, most of it in punitive damages.

A US judge on Monday ordered North Korea to pay $501 million over the death of American Otto Warmbier, concluding that the university student likely suffered torture.

The penalties, which North Korea is highly unlikely to pay willingly, come in the midst of a diplomatic drive by President Donald Trump, who is eager to reach a potential landmark deal with leader Kim Jong Un.

The parents of Warmbier sued North Korea in a US court after the 22-year-old was flown back to the United States last year in a coma, unrecognizable to his family and died within days of his return.

Beryl Howell, the chief judge of the US District Court for Washington, DC, awarded $501,134,683.80 to the family, most of it in punitive damages.

"An American family, the Warmbiers, experienced North Korea's brutality first-hand when North Korea seized their son to use as a pawn in that totalitarian state's global shenanigans and face-off with the United States," she wrote.

"North Korea is liable for the torture, hostage-taking, and extrajudicial killing of Otto Warmbier, and the injuries to his mother and father, Fred and Cindy Warmbier," she added.

Howell said North Korea did not submit any response to the lawsuit, which the family filed under the Foreign Sovereign Immunities Act, a US law that allows lawsuits against foreign governments over offences not considered to be covered by diplomatic immunity.

As one of the world's most isolated countries, North Korea is believed to have few assets in the United States that could be seized to meet the judgment.

But North Korea is seeking to end economic sanctions imposed over its nuclear program. An accord with Trump raises the possibility of future US assistance, which could become entangled by the court-ordered damages.

Trump, who held a historic summit in June with North Korea, posted on Twitter that he had a briefing Monday on diplomatic efforts and is "looking forward to my next summit with Chairman Kim!"

Senator Robert Portman of Ohio, who had secretly met North Korean officials as he pushed for Warmbier's release, hailed the court verdict.

"While nothing will bring back Otto Warmbier, who was such a promising young man, I'm glad that North Korea has been rightly held accountable for his death," he tweeted.

Warmbier, an Ohio native who studied at the University of Virginia, travelled to North Korea on a tour but did not return home. He was pulled away at the Pyongyang airport and charged with crimes against the state for allegedly taking down a poster in support of Kim.

The ruling said the family was continually advised by the State Department to stay quiet, believing North Korea would make a demand in return for Warmbier's safe release.

When he finally returned home after 17 months, Warmbier a high school prom king who was studying business and economics was attached to a feeding tube and was howling incomprehensible noises, the ruling said.

The head-shaven Warmbier had gone blind and deaf, his once straight teeth misaligned and his eyes bulging out, it said.

The judge quoted his neurologist in Ohio, Daniel Kanter, as concluding that Warmbier probably suffered brain damage of the sort caused by a loss of blood flow to the brain of five to 20 minutes.

Based on previously known cases in which North Korea extracted confessions, Warmbier's injuries could have been caused by water-boarding, electric shock, suffocation or pulling his teeth with pliers, Howell said.

North Korea has denied ill-treatment of Warmbier, saying he contracted botulism, a nerve disorder caused by toxin poisoning, while in detention.

But the judge quoted medical tests that found no evidence of botulism. And even if the diagnosis were true, the judge questioned why North Korea did not earlier send him back for medical care, a delay which she said: "compounds the deliberate nature of the totalitarian state's brutal treatment of Otto."