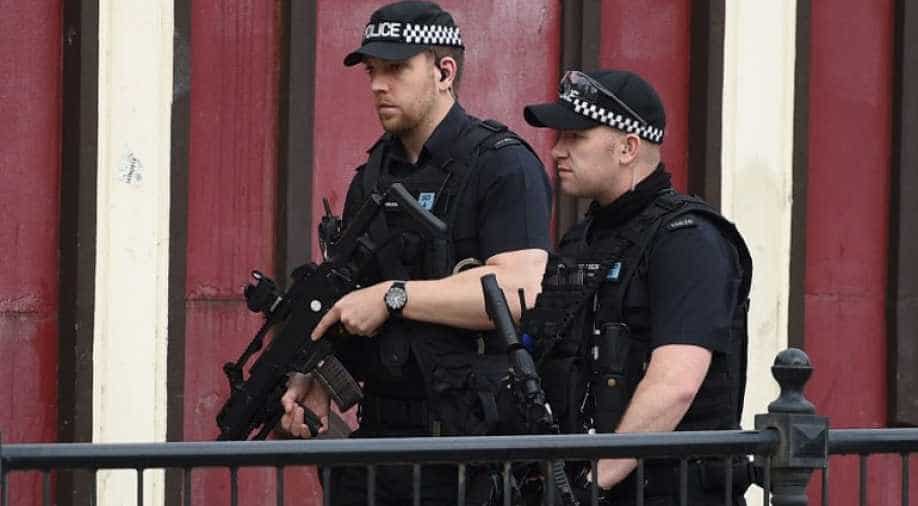 Armed police patrol near Victoria station in Manchester after the blast. Photograph:( AFP )

The man behind the attack outside a pop concert in Manchester aimed to cause "maximum carnage" by detonating his bomb outside one of the exits, British prime minister Theresa May told reporters.

May said the attacker had shown "cold calculation" by targeting children, adding that police believe they know his identity but are not disclosing it for the moment as the investigation continues.

At least 22 people, including some children, were killed and 59 wounded when a suicide bomber struck as thousands of fans streamed out during US singer Ariana Grande's concert in the English city of Manchester on Monday evening.

According to police, the blast occurred "within the foyer area of the stadium", although the venue said it was in a public area outside. Prime Minister Theresa May said it was near one of the arena exits.

The arena foyer connects the 21,000-capacity auditorium with Victoria train and tram station, a major transport hub on the northern edge of the city centre. It remained closed on Tuesday lunchtime.

Witnesses described a "huge bomb-like bang" and scenes of panic as young fans rushed out and parents waiting outside searched frantically for their children.

Authorities are treating the attack as a terrorist incident, but no one has so far claimed it. The bombing is the latest in a string of attacks that have hit Europe in recent years, several claimed by the Islamic State group.
Britain's threat level remains at "severe", meaning an attack is highly likely, but this will remain under review, Theresa May said.

A shopping centre in the northern English city of Manchester was evacuated on Tuesday morning before it reopened shortly afterwards. (Reuters)