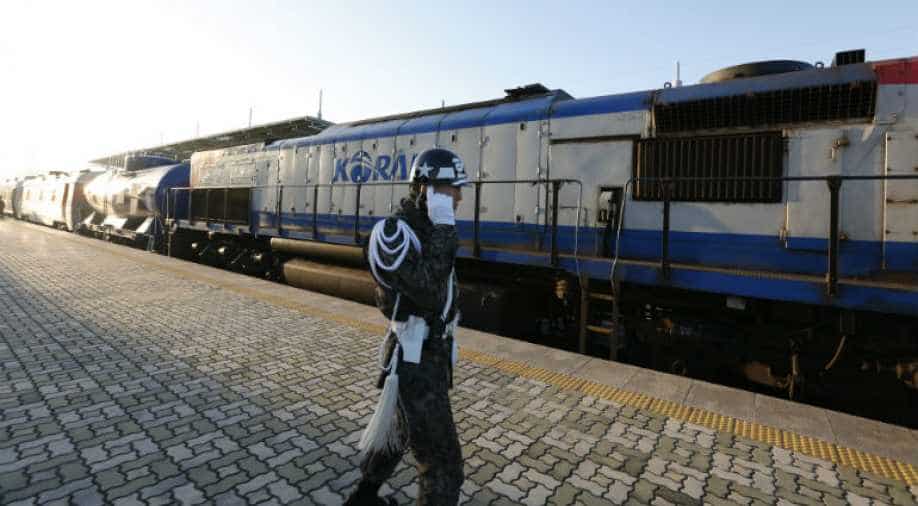 A South Korean soldier stands next the train that will travel across the border into North Korea at the Dorasan Station in Paju, South Korea. Photograph:( Agencia EFE )

The project was launched after the UN Security Council a few days ago granted an exemption from sanctions against the North Korean regime for its testing of weapons of mass destruction.

The two Koreas on Friday began a joint feasibility survey to assess the situation for upgrading and possibly reconnecting its railway lines across the border.

A South Korean train with a dozen engineers and officials on board travelled across the border to begin the evaluation of some 1,200 kilometres (745.6 miles) long railway line in North Korea that will go on until December 17, according to a note sent to the media by the small group of journalists travelling on board.

The six-car convoy departed from Dorasan Station, a few kilometers south of the border, and headed to Panmun Station in the north, near Kaesong City.

The project was launched after the UN Security Council a few days ago granted an exemption from sanctions against the North Korean regime for its testing of weapons of mass destruction.

This exemption allows the shipment of fuel and other materials to the North, enabling the study, which is normally prohibited by Security Council resolutions.

The survey is the result of an agreement signed by the two Koreas, two countries that are still technically at war since the 1950s, during the first summit of their current leaders held in April.

Apart from assisting in upgrading the North Korean stretch, the project seeks to boost the reconnection of railways across the border provided the sanctions imposed on Pyongyang -which is in talks with Washington to negotiate dismantling of its arsenal of weapons - is lifted in future.

The current feasibility study is the second to be carried out by the two Koreas after a similar one in 2007, which allowed freight trains to run between the two countries for a year before the cooling of the bilateral relationship forced the tracks to be disconnected again at the border.