Turkey: 8 killed, over 100 injured in explosion after lawmakers' detention 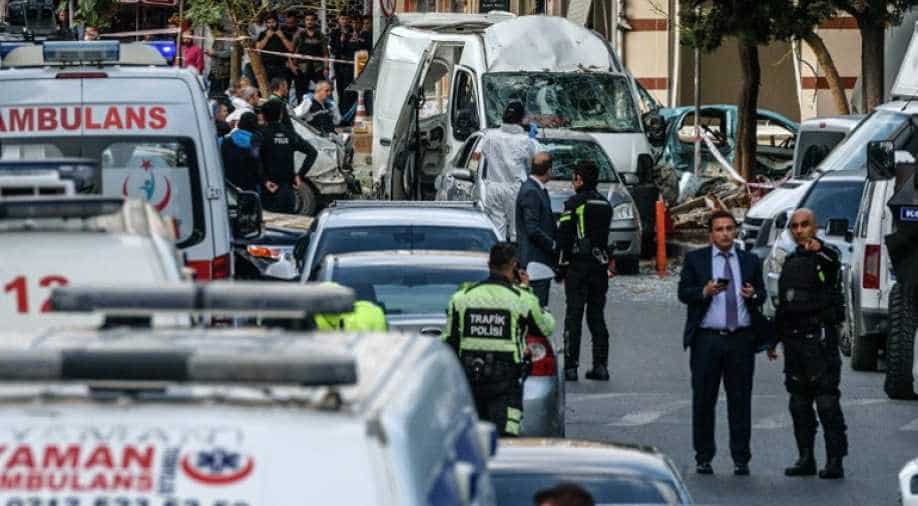 Several ambulances were dispatched to the scene of the blast, the cause of which was not immediately clear. (Representative image) Photograph:( AFP )

Eight people were killed and over 100 wounded in a blast outside a police building early Friday in Turkey's city of Diyarbakir, the centre of the country's Kurdish minority, Prime Minister Binali Yildirim said. Blaming the outlawed Kurdistan Workers Party (PKK) for the blast, he said the party "had showed its ugly face."

The explosion occurred just hours after police detained the two co-leaders of the country's main pro-Kurdish party, Peoples' Democratic Party (HDP), and nine other MPs in a major escalation of the crackdown against leading Kurds.

The HDP said the detention of its MPs' marked the "end of democracy" in Turkey.

"The goal of these measures is to shut down the third-largest party in parliament. This is a dark day not only for our party but for all of Turkey and the region as it means the end of democracy in Turkey," it said, vowing that it would not surrender to these "dictatorial policies".

Police had detained HDP's Selahattin Demirtas at his home in Diyarbakir while his co-chairperson Figen Yuksekdag was held in Ankara as part of a terror investigation, AFP reported.

Demirtas and Figen appeared before judges in Diyarbakir who will decide whether to remand them in custody.

Among those detained was prominent lawmaker Sirri Surreya Onder, who in the past has been a pointman for contacts with jailed PKK leader Abdullah Ocalan. The head of the HDP's faction in the Turkish parliament, Idris Baluken, was also held. Another detained MP, Ziya Pir, was released on bail, Turkish telivision said.

Their detention appeared part of a large-scale operation against the HDP, which is the third largest party in the Turkish parliament with 59 seats and the main political representative of the Kurdish minority.

The two leaders are accused of spreading propaganda for the outlawed Kurdistan Workers Party (PKK). Demirtas is also accused of provoking violence in deadly protests in October 2014, AFP reported.

Thirteen staffers from the opposition Cumhuriyet newspaper, including the editor-in-chief, were detained on Monday, further heightening strains in Turkish society.

The crackdown against pro-Kurdish politicians has intensified after a failed coup in July. Critics say it has gone well beyond targeting the actual coup plotters, AFP reports. The government has since stepped up its offensive against the Turkish security forces and staged regular attacks that have claimed hundreds of lives of military and police personnel.

Tensions have increased in the Kurdish-dominated southeast after the collapse of a fragile ceasefire declared by the PKK collapsed in 2015.

The monitoring site, Turkey Blocks, which monitors internet restrictions in Turkey, told AFP this had been done by a "throttling" at Internet Service Provider (ISP) level including national providers like TTNet and Turkcell.

Prime Minister Binali Yildirm did not directly confirm that blocks were in place but acknowledged that "from time to time for security reasons we can use such measures".

"These are temporary measures. Once the danger is passed, everything returns to normal," he told reporters in Istanbul in televised comments.

The UN expressed its concern about the detentions and also called the crackdown on the media "very worrying".

"There needs to be a presumption of innocence when you’re going to suspend somebody from their job, when you’re going to detain somebody, you need to do this in line with due process," UN human rights spokeswoman Ravina Shamdasani told a briefing in Geneva. "And given the numbers, we are worried this is not the case."

Germany, meanwhile, summoned Turkey's envoy to after Friday's detentions, warning that a crackdown against terror should not be used as an excuse to silence the opposition.

Steinmeier said that while Ankara had the right to counter terrorism, "that should not serve as a justification to muzzle the opposition or to put them behind bars".

EU foreign policy chief Federica Mogherini tweeted that she was "extremely worried" and would call a meeting of EU ambassadors in Ankara.

In race for White House, US candidates turn to dating apps