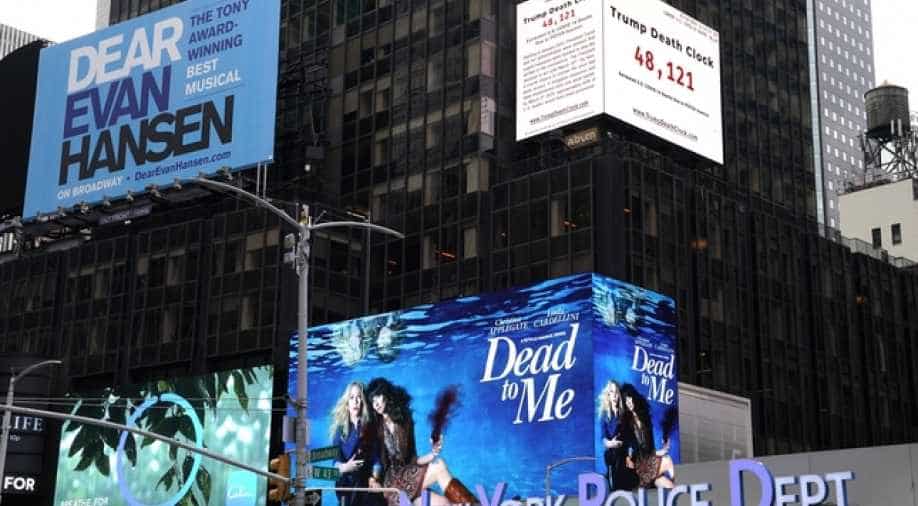 "Trump Death Clock," created by filmmaker Eugene Jarecki, shows the number of US coronavirus deaths that its creator says could have been avoided if President Donald Trump had acted on time, according to a report.

The "clock" was installed on the roof of a Times Square building, empty due to the pandemic, the report added.

"Trump Death Clock," ticks on the assumption that 60 per cent of COVID-19 deaths in the United States could have been prevented had the Trump administration implemented mandatory social distancing and school closures just a week earlier than it did, on March 9 instead of March 16, Jarecki explained in a post on Medium.

The New York-based filmmaker, who has twice won awards at the Sundance Film Festival, explained that 60 per cent was a conservative estimate calculated by specialists following remarks made in mid-April by leading US infectious diseases expert Anthony Fauci.

Fauci, who has become the trusted face of the government's virus response, had said that if "you had started mitigation earlier, you could have saved lives."

"Just as the names of fallen soldiers are etched on memorials to remind us of the cost of war, quantifying the lives lost to the president's delayed coronavirus response would serve a vital public function."