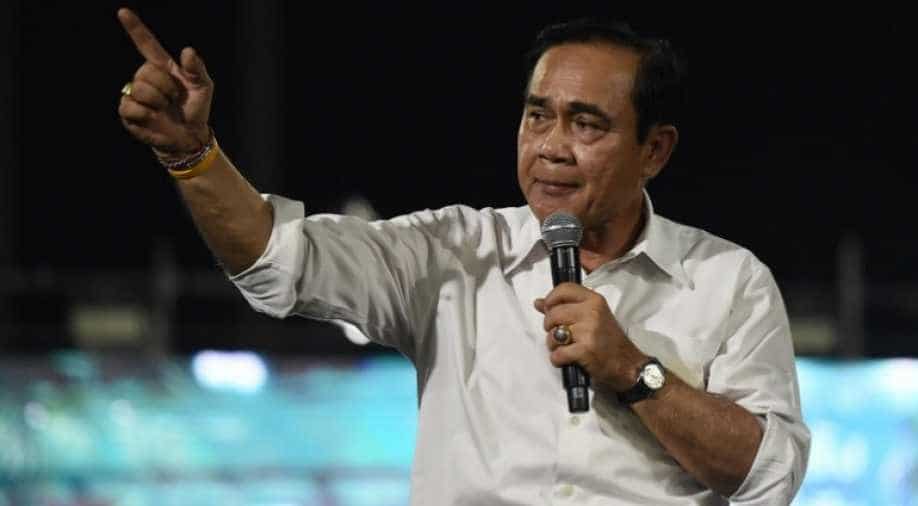 The mastermind of a 2014 coup, Prayut headed the junta regime for five years before a disputed March election tilted to the military formally ushered him in as a civilian premier.

Thai opposition MPs demanded Prime Minister Prayut Chan-O-Cha resign following weeks of the uproar over the ex-junta head's omission of a vow to uphold the constitution during his inauguration, raising questions of his legitimacy.

The mastermind of a 2014 coup, Prayut headed the junta regime for five years before a disputed March election tilted to the military formally ushered him in as a civilian premier.

But the new government has struggled to maintain a foothold as it is dogged by scandals from a cabinet member being accused of serving time in jail for drug-dealing in Australia to Thais angered by a slow response to floods in the rice bowl northeast.

Questions over his administration's legitimacy have also been raised after it was revealed Prayut and his cabinet had pledged loyalty to the king but failed to recite allegiance to the constitution when he was sworn in as civilian premiere in July.

The Constitutional Court last week had declined to deliberate on his omission.

But in parliament Wednesday, opposition lawmakers called for his resignation, saying the incomplete oath showed his "ignorance of the constitution", and questioned whether he can be trusted to uphold the rule of law.

It has "destroyed public confidence as well as his credibility", Piyabutr Saengkanokkul, secretary-general of the youth-driven Future Forward Party, said.

"Prayut's incomplete oath-taking makes the public doubt whether he will uphold and comply with the constitution," he said.

The omission could also mean that the ex-junta chief "may have thought of staging another coup", said Thai Liberal Party leader Sereepisuth Temeeyaves.

Prayut was present for part of the parliament session, held only for one day without a vote before MPs go for recess on Thursday.

Speaking briefly after listening to MPs hammer him for several hours, Prayut proclaimed "respect for all the principles in the constitution".

Coups and street protests have plagued Thailand's politics for almost two decades, with the putsch-happy army pressing the reset button on previous administrations.

But political divisions remain deep as Thais in the latest March election have shown a weariness towards a conservative arch-royalist elite, choosing instead to vote in MPs vowing to remove the military from politics.