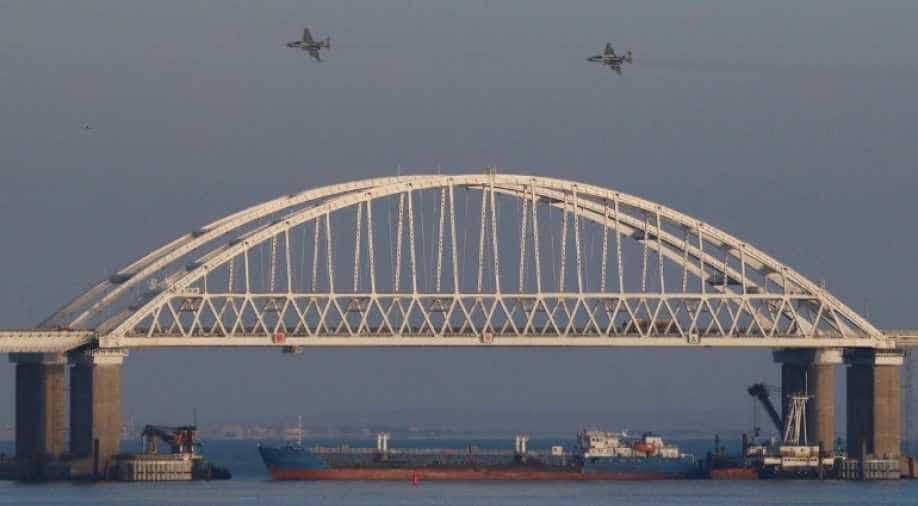 Russian jet fighters fly over a bridge connecting the Russian mainland with the Crimean Peninsula with a cargo ship beneath it after three Ukrainian navy vessels were stopped by Russia. Photograph:( Reuters )

Russia has steadily poured new military hardware into Crimea since it annexed it from Ukraine in 2014, turning it into what Kremlin-backed media have called a fortress.

Russia said on Wednesday it would send more of its advanced S-400 surface-to-air missile systems to Crimea and a Reuters reporter saw a Russian warship deploying nearby as tensions with Ukraine rose over Moscow's seizure of Ukrainian navy ships.

Russia has steadily poured new military hardware into Crimea since it annexed it from Ukraine in 2014, turning it into what Kremlin-backed media have called a fortress.

Moscow's announcement about new missiles follows its seizure of three Ukrainian naval vessels and their crews on Sunday over what it said was their illegal entry into Russian waters, something Ukraine denies.

Kiev introduced martial law in parts of the country after the incident, saying it feared a possible Russian invasion.

The episode risks derailing a meeting between U.S. President Donald Trump and Russian President Vladimir Putin at the G20 in Argentina later this week. Trump said on Tuesday that he might cancel the meeting due to the incident, but the Kremlin said on Wednesday it thought it was still on.

Vadim Astafyev, a spokesman for Russia's southern military district, was cited by Russian news agencies on Wednesday as saying that a new battalion of S-400 missiles would be delivered to Crimea soon and become operational by the end of the year.

The deployment is likely to have been long-planned, but the timing of the announcement appeared designed to send a message to Ukraine and the West that Russia is serious about defending what it regards as its own territory and waters.

Crimea already hosts three battalions of the anti-aircraft missile systems which have a range of up to 400 km (250 miles) allowing Russia to control large swaths of the skies above the Black Sea.

The new deployment would allow it to increase its air defence coverage area.

The United States has previously said that Russia's deployment of the missile systems to Crimea is "not good".

Separately, a Reuters correspondent in Crimea on Wednesday observed a Russian navy minesweeper ship, the Vice-Admiral Zakharin, heading for the Sea of Azov, which is used by both Ukraine and Russia and is an area of growing tensions.

Citing sources in Ukraine's ruling circles, Russia's Izvestia newspaper reported that Kiev had been trying to persuade Washington - so far unsuccessfully - to open a military base in Ukraine.

Reuters could not independently confirm the report.

Later on Wednesday, a Crimean court is due to order the detention of nine of the 24 captured Ukrainian sailors - including senior Ukrainian naval officers and at least one member of Ukraine's SBU intelligence agency.

A court in Simferopol, the capital of Crimea, on Tuesday, ordered the other 15 Ukrainian sailors to be detained for two months pending a possible trial.

All of the sailors face jail terms of up to six years if found guilty of what Moscow says was a plot to illegally cross the Russian border by trying to pass through the Russian-controlled Kerch Strait on Sunday without advance notice and ignoring calls to stop.

Ukraine says its ships did nothing wrong and have every right to use the strait, the only gateway to the Sea of Azov from the Black Sea, without Russian permission.