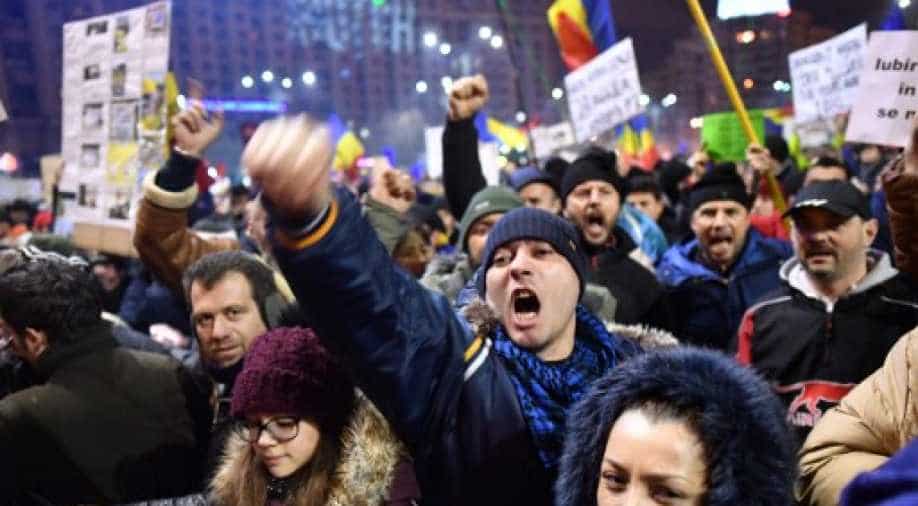 Tens of thousands of people in Romania have been out in the streets to protest the decree in the last five days. In photo: People protest in front of the government headquarters against the contentious corruption decree. Photograph:( AFP )

The bruised Romanian government has decided to repeal a legislation that was viewed by hundreds of thousands in the country as being soft on those ensnared in major corruption scandals.

Sorin Grindeanu, who came to power in December, announced the climbdown in a hastily-arranged press conference, sparking buoyant celebrations among the tens of thousands who attended the largest protests in the country since dictator Nicolae Ceausescu was toppled and executed in 1989.

The legislation was due to become effective from February 10 -- a decree that was condemned by the critics because they said the government was attempting to free several PSD members who had been jailed on corruption charges in recent times.

The Grindeanu administration also wanted the parliament to review cases of some 2,500 graft convicts who have less than five years of jail sentence.

The new decree would have benefitted the head of Social Democrats, Liviu Dragnea. He was banned by law to become the prime minister of the country after the court found him guilty of vote-rigging in 2016. He was slapped with a two-year prison sentence for the violation.

The government's decision to go easy on the corrupt was also slammed by the US, who had said that new decree would "undermine the rule of law".

But government, in its defence, had said that they were planning to put the legislation into force to avoid overcrowding of prisons and to bring penal law in line with the constitution.

Speaking to reporters, Grindeanu said his decision was "not to divide Romania", with his comments coming in the backdrop of mass protests for the fifth consecutive night.

On Friday night there were between 200,000 and 250,000 people demonstrating around the country, and on Wednesday as many as 300,000 according to estimates by Romanian media.

On Saturday, Grindeanu said that the penal code still had to be fixed but that a bill would be sent to parliament "as soon as possible" and the proposed 200,000-lei limit would probably be scrapped.

The PSD has only just returned to power after handsomely winning elections on December 11 promising to boost salaries and pensions in a country where one in four people lives in poverty.

This was barely a year after public anger over a deadly nightclub blaze, blamed on corrupt officials turning a blind eye to fire regulations, drove the PSD-led government from office.