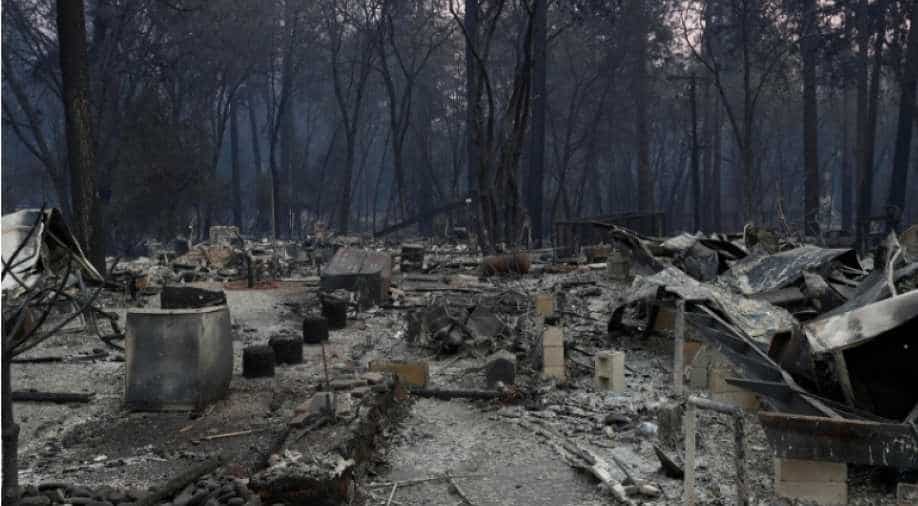 At least 300 people who fled the Camp Fire were sheltering on Friday in the flood-prone parking lot of a Walmart in Chico, about 15 miles (24 km) west of where the blaze consumed the mountain town of Paradise on November 8.

Thousands of people displaced by California's most destructive wildfire, including hundreds living in tents and cars, face heavy rains next week that could trigger dangerous floods and mudslides, while helping douse the flames.

At least 300 people who fled the Camp Fire were sheltering on Friday in the flood-prone parking lot of a Walmart in Chico, about 15 miles (24 km) west of where the blaze consumed the mountain town of Paradise on November 8.

More than 1,000 are missing, according to police. The remains of at least 71 people have been identified so far.

A rain storm is forecast to hit next week and so authorities are asking people to leave the Walmart lot by Sunday afternoon, said Bryan May, a spokesman for the California Office of Emergency Services.

Hillsides that have been scorched by a wildfire are at risk for mudslides when it rains, experts say. The flames burn away vegetation that holds the soil in place and bake a waxy layer into the earth that prevents water from sinking more than a few inches into the ground.

Authorities say they have enough shelter space to provide a bed for everyone who wants one, but they acknowledge challenges ahead in finding more long-term housing for the displaced.

May said it was not clear exactly how many people are in need of housing, but at the height of the Camp Fire authorities had ordered more than 52,000 people to evacuate.

A survey found only 100 housing units available for rent in all of Butte County, where the fire has been burning, May said.

Already, more than 1,100 people are bunking at shelters in the area, according to the Red Cross, and countless more are staying with friends and family.

The fire forced caregiver Robin Tompkins, 43, and her family from their home in the town of Magalia, north of Paradise. Friends let them stay for a week, but now the family needs to find other accommodation, she said at an evacuee relief station in the Chico Walmart parking lot.

Her husband Timothy, who works as a cook at a Chico cafe, was frustrated by the lack of information about how long he might be kept from returning to Magalia.

"I keep hearing different things: a month, four months, a year. We just want to get home," he said.

Randy Greb, 61, was camping in a tent in the parking lot after his home in Paradise was destroyed.

"I lost everything. I've got the clothes I got, but people have been nice and really helping us," Greb said. "Everybody has been doing their best."

The Walmart tent village is the largest of several outdoor encampments of refugees from the Camp Fire.

Some displaced people prefer to remain outdoors because they want to stay with their pets, which many shelters say they cannot accept, or are concerned about losing their privacy, May said.

But authorities are encouraging them to camp near a shelter so they can access services for hygiene and other needs, such as free diapers and Clorox wipes.

Given the shortage of suitable housing, attention has turned to the Federal Emergency Management Agency.

It has said that it is working with state and local officials to evaluate options, and is considering using travel trailers to house some of the displaced.

Last year, after a deadly wildfire destroyed hundreds of homes in the San Francisco Bay Area town of Santa Rosa, FEMA trailers were used to house some of the displaced.

Among the thousands who have applied for help from FEMA is Linda Harned, 63, a retired caregiver who lost the home that she shared with her husband and several relatives in Magalia.

"I'm depressed and upset," Harned said at the relief station outside the Walmart in Chico. "It's hard. I never knew how much I loved my house."