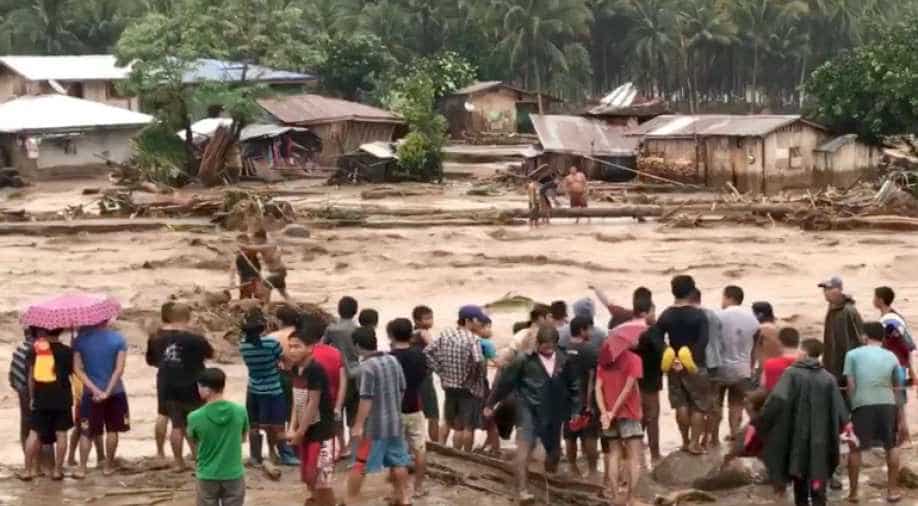 A total of 70,000 have been displaced or affected by the storm, according to the International Federation of Red Cross and Red Crescent Societies. Photograph:( Reuters )

Some 200 people have been killed in the southern Philippines after a tropical storm battered the archipelago nation's second-largest island, triggering heavy flooding and landslides that have ravaged towns and displaced tens of thousands.

Tropical storm Tembin lashed Mindanao island, home to 20 million people, on Friday with gusts of 125 kilometers (80 miles) an hour and torrential rain, wiping out at least one mountain village and prompting a massive rescue operation over the weekend. Police said 144 people remained missing while more than 40,000 had fled to evacuation camps as Tembin roared out into the South China Sea early Sunday.

A total of 70,000 have been displaced or affected by the storm according to the International Federation of Red Cross and Red Crescent Societies (IFRC), which warned that continued heavy rain could hamper the search for survivors. "People left everything behind when they fled for their lives," the IFRC's Philippines operations and programmes manager Patrick Elliott said in a statement.

The Philippines is pummelled by major storms every year, many of them deadly, but Mindanao tends to be less affected. Footage shows vast tracts of land on the island are now under brown water, often waist deep as local try to flee to safer ground.

Local police said 135 people were killed and 72 were missing in the northern section of Mindanao, while 47 were dead and 72 missing in the impoverished Zamboanga peninsula on its western side. Another 18 people perished in the province of Lanao del Sur in the center of the island.

One of the places hit hardest by the storm was the mountain village of Dalama, which was virtually erased from the map. Footage filmed by Filipino television network ABS-CBN showed houses destroyed or engulfed by floodwaters there and rescuers retrieving the body of a dead girl buried in a landslide.

Police, soldiers, and volunteers used shovels and their bare hands to dig through mud and debris in their search for survivors. "The flood was already closed and the people were not able to get out from their homes," Armando Sangcopan, an elderly male survivor, told the station.

Rescuers said a total of 103 houses were carried off by rampaging floodwaters in Dalama. The storm approached the western island of Palawan, a popular tourist draw, late Saturday and swept into the South China Sea before dawn, the state weather service said.

"So far zero casualties, but we have accounts of some people missing," Palawan civil defence chief Zaldy Ablana told DZMM radio in an interview on Sunday. But in a Palawan fishing village, a 53-year-old man was killed by a crocodile while securing his boat in a river.

Tembin struck less than a week after Tropical Storm Kai-Tak left scores dead and more than 20 missing in the central Philippines, straining the disaster-prone nation's already stretched resources. The deadliest typhoon to hit the country is still Haiyan, which killed thousands and destroyed entire towns in heavily populated areas of the central Philippines in November 2013.