'Out of this world': Liverpool boss Jurgen Klopp revels in FA Cup success 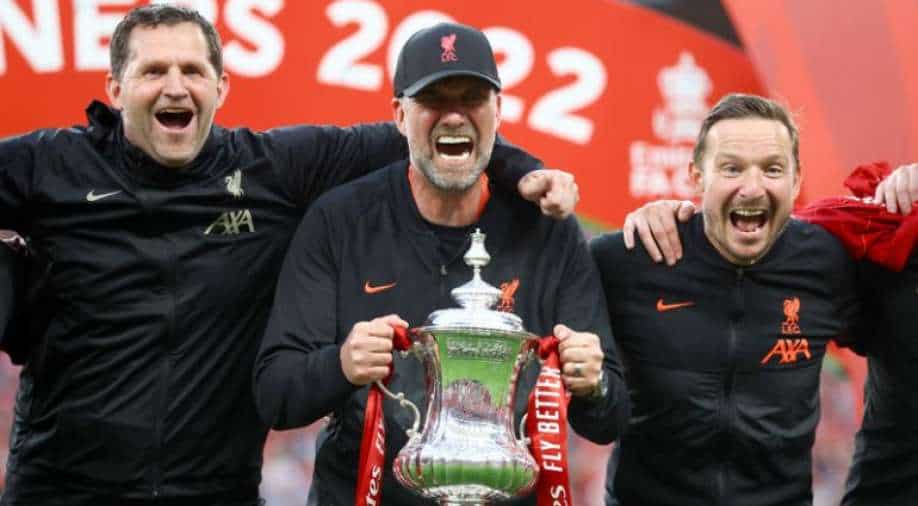 Liverpool edged out Thomas Tuchel's team 6-5 in the shootout after the game had finished 0-0 after extra time, lifting their eighth FA Cup trophy and the first since 2006

Liverpool manager Juergen Klopp hailed his side's character after they beat Chelsea on penalties in the FA Cup final on Saturday in their quest for an unprecedented quadruple of trophies.

Liverpool edged out Thomas Tuchel's team 6-5 in the shootout after the game had finished 0-0 after extra time, lifting their eighth FA Cup trophy and the first since 2006.

"It is pure joy to be part of this club at the moment," the German manager told reporters. "There is a lot to come and a lot to play for. Tonight I decided to just enjoy this moment and not think about the next challenge. It is really special."

Liverpool, who won the League Cup in February, trail Premier League leaders Manchester City by three points with two games remaining and face Real Madrid in the Champions League final on May 28.

"That is all because of the character of these players. It's the only reason ... I can motivate as much as I want, but if these boys got soft or weak then you would have no chance to compete with City in a league like this," said Klopp.

"It's out of this world. It's massive. It's game number 60 in a very intense season and to put in a performance like that is incredible."

He dedicated the shootout success to German sport neuroscience company neuro11, which has been helping Liverpool players with data-based training.

"Penalty shootouts are a lottery but we did it again. We work with a company called neuro11. One of them is a neuroscientist who said they can train penalty shooting - and this trophy is for them like the League Cup was," added Klopp.