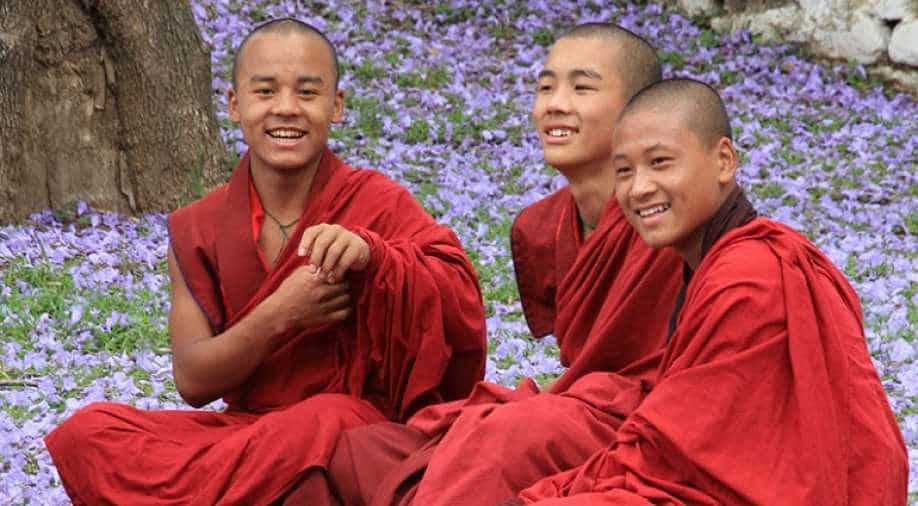 Buddhist tradition in Myanmar requires youths to spend some time in a monastery or nunnery before the age of 18. Photograph:( Zee News Network )

Riding elephants and horses in heavily bejewelled costumes, thick eyeliner and rouged lips, boys in central Myanmar parade through their village as ancient princes in a ceremony to mark their passage to monkhood.

The whole village of Myinkabar, nestled among the centuries-old pagodas of Bagan city, turns out for an annual lavish feast in their honour.

Everyone pays respects to the children giving up their worldly belongings -- at least for a few days.

Buddhist tradition in Myanmar requires youths to spend some time in a monastery or nunnery before the age of 18 in what is viewed as an important coming of age ritual.

Most people undertake this at least once in their lives.

The first step for both boys and girls is to have all their hair shaved off.

They adjust to a demanding daily schedule of alms collecting, chores, study and worship.

But perhaps the hardest aspect is not eating from 12 noon until sunrise the next morning.

Many `novices` are happy to exchange their robes -- maroon or saffron for monks, pink for nuns -- at the end of the week for their normal attire and return to their families.

Others, however, are there for the long-term, destined for a monastic life.

"Sometimes I want to play football like other children in Yangon but I can`t," says 13-year-old Tate Tha, who has been a novice monk in Yangon for five years already.

"I`m envious of them but I`m doing good things in life and I am happy for that."

Traditionally monasteries and convents have offered the chance for children, particularly from poorer backgrounds, to receive an education in the country which is 87 percent Buddhist.

But as free places in government schools have become more widely available, the number of novice monks and nuns is in decline, a trend that worries some Buddhism experts.

"It is like a tree whose roots are being destroyed," says Mya Thein, 50, a scholar at Yangon Buddhist University.

"We need to take care of it and we also need to find a solution. It is now in danger."