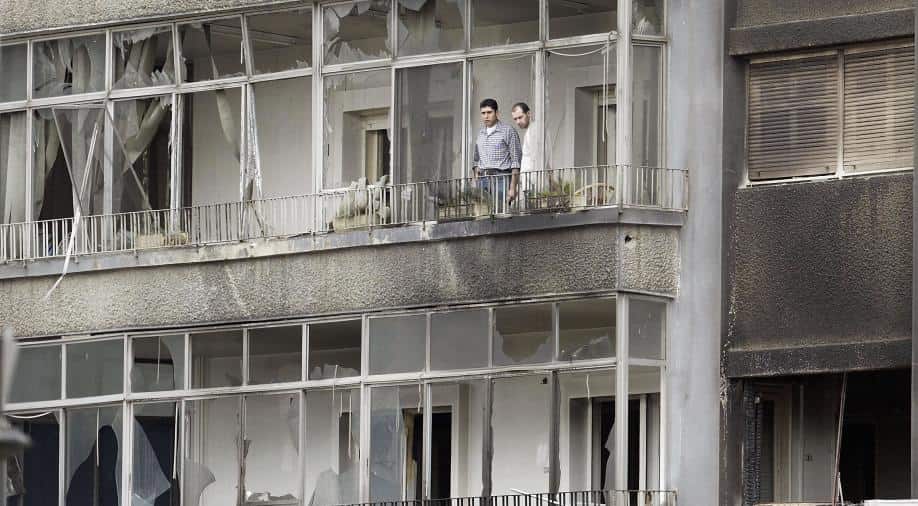 A Syrian family look out of their apartment's shattered windows inside the damaged building of the former United Nations offices in the Mazzeh diplomatic quarter April 28, 2004 in Damascus, Syria Photograph:( Getty )

Follow Us
In a city whose windows have been blasted from their frames, remaining residents of Syria`s war-torn Aleppo go about their daily lives behind gaping holes covered with plastic.

For inhabitants of the battle-scarred and divided city, glass windows have become more of a liability than a luxury.

"Every window pane we have has been shattered by shelling," said Ammar Wattar, an English teacher, as he fitted a hard plastic sheet into the window frame of his home in the government-held district of Al-Midan.
"We changed it the first time, then the second time, the third time -- until this time, we decided not to change it anymore."

The windows are regularly blown out in the frequent rocket attacks and air strikes on Aleppo city, turning the shards into dangerous projectiles.

Replacing them is also prohibitively expensive - so residents have been opting to cover the empty frames with sheets of plastic.
In many neighbourhoods, children can be seen slipping behind white tarpaulin hanging like curtains from the doorways of their apartments.
Abandoned apartment buildings are often identified by the partly-smashed glass windows protruding like jagged teeth from the metal frames.

Clashes and bombardment have carried on in Aleppo despite a February 27 truce across parts of Syria and multiple attempts to secure a local freeze on fighting in the city.

Asraa al-Masri, a teacher in a regime-held district of the city, said a shard of glass flew into her daughter`s leg during a rocket attack.
She has since stopped replacing her windows with glass, but she now faces a new set of worries.

"Bugs, dust, soot, loud noises, the burning smell of the generators, which are bad for your health and negatively affect our children while they`re studying," she listed.

Perhaps no one has seen as much shattered glass as Mohammed Bouz, who used to sell it in a shop in Al-Midan.
"My stockpile has been destroyed many times during the shelling, and I haven`t been able to get new deliveries," he told AFP.
Before Syria`s war erupted in March 2011, a square metre of glass cost 425 Syrian pounds (70 cents) -- but it now fetches about 3,300 ($6).

Aleppo`s desperate residents -- many of whom have been left jobless since war came to their city in 2012 -- opt for the much cheaper plastic at a maximum of 500 Syrian pounds per square metre.

But for Umm Ahmad`s conservative Muslim family, no proper windows means no privacy.
Synthetic canvas billows in the wind, "so my daughters and I can only change our clothes in the bathroom or in the hallways so our neighbours don`t see us", the 52-year-old woman said.

Across the frontline in Aleppo`s rebel-held east, shopkeeper Ali Makansi recounts sitting in his grocery store one day "when a mortar shell crashed into the roof of a nearby building".

"Because the explosion was so powerful, an entire window pane fell on me and cut the main nerve in my hand," said the 32-year-old whose shop is in the Al-Shaar neighbourhood.
"All the houses and commercial buildings in Aleppo are using plastic now instead of glass," he said. "Plastic is cheap and won`t hurt anyone if there`s an explosion nearby."

Mohammed Jokhdar, a 29-year-old Arabic language teacher, sent his family to Turkey after his brother was killed in shelling last year.
He lives alone in his apartment in Bustan al-Qasr district where he has covered the windows with sheets of transparent plastic.
"But the plastic doesn`t protect from the weather and sometimes water leaks through. It doesn`t block the noise either -- I feel like I`m in the street."

Abu Omar, 69, who lives in Tariq al-Bab neighbourhood, also complains about the noise and water leaks.
But "the biggest problem is the street cats... They tear the plastic and come into my home looking for food."
Read in App