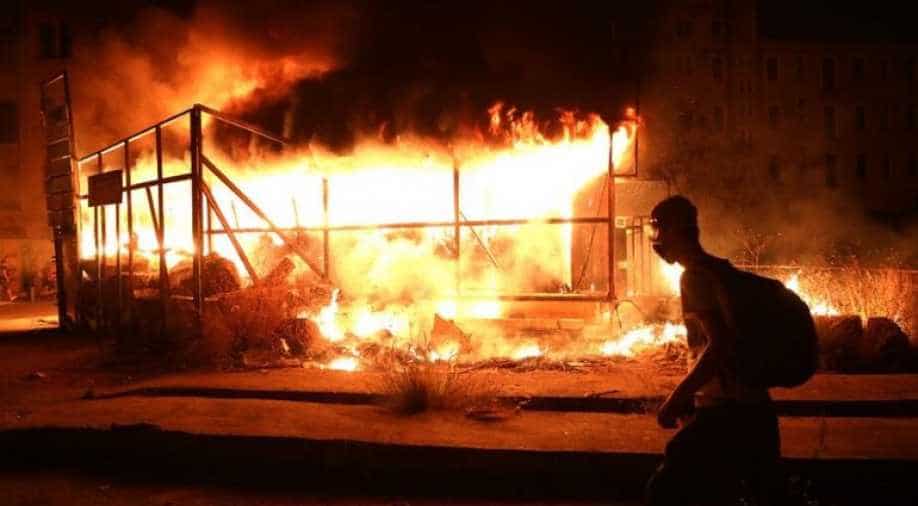 A Lebanese anti-government protester walks past a burning wooden structure during a demonstration against dire economic conditions, in the downtown district of the capital Beirut Photograph:( AFP )

The Lebanese pound sank to a record low on the black market on Thursday despite the authorities' attempts to halt the plunge of the crisis-hit country's currency, sparking a flare-up in anti-government protests.

Lebanon is in the grip of its worst economic turmoil in decades and holding talks with the International Monetary Fund to secure billions in aid.

A prolonged economic downturn was the major grievance that sparked unprecedented mass protests in October last year against the political class, accused of corruption and incompetence.

Protests broke out again on Thursday, with roads blocked across the country, and security forces fired tear gas to disperse demonstrators.

A throng of protesters blocked a key road in the centre of the capital Beirut, an AFP journalist reported.

"Thief, thief, Riad Salame is a thief!" demonstrators chanted, referring to the governor of the central bank.

"People have no work, no food to eat. They cannot buy medicines, nappies or milk for their children."

In the centre of the capital, near Riad al-Solh square, security forces fired tear gas to disperse protesters who threw stones, according to local television.

In the northern city of Tripoli, the army also fired tear gas to disperse demonstrators who had tried to take over the local branch of the Central Bank, according to the state news agency ANI, adding that eight people were wounded.

A Molotov cocktail set fire to trees in front of the building, an AFP correspondent witnessed.

The Lebanese pound remains officially pegged to the US currency at a rate of 1,507 per dollar but its value has tumbled on the black market.

Rates from three money changers on Thursday morning indicated it had lost almost 70 per cent of its value compared with the official rate.

One money changer who asked to remain anonymous said he was selling dollars at a rate of 5,000 pounds and buying them at 4,800. Another in Beirut's Dahiya neighbourhood was buying dollars for 4,850 pounds.

The new nadir came despite government pledges to halt the pound's devaluation, and the money changers' union issuing a maximum daily buying rate of 3,890 and selling rate of 3,940.

On Thursday evening, a central bank statement cited by local media hit out at "baseless" information on social media of "exchange rates at levels far from reality, which mislead citizens".

The office of Prime Minister Hassan Diab announced an urgent cabinet meeting would be held on Friday to discuss the situation.

Lebanese banks have gradually restricted dollar withdrawals since late last year, forcing those in need to buy them at a higher rate on the black market.

An AFP photographer said on Thursday that many money-changing shops had closed, citing a lack of dollars.

In an apparent bid to better oversee the exchange market, the central bank is set to launch an online platform on June 23 through which changers will be asked to register all operations.

Lebanon's economic crunch has caused poverty to soar to 45 per cent of the population and pushed unemployment up by 35 per cent.

It has also sparked steep inflation, including on imported products.

Nabil, a retired 64-year-old, said his buying power had taken a blow.

"Yesterday I went to a home appliance store to buy a fridge, and the salesman asked me for $1,200 in cash, or the equivalent at an exchange rate of 5,000, which is six million pounds," he said.

Lebanon needs "emergency external assistance to ward off the worst social consequences of the crisis", analysts from the International Crisis Group warned on Monday.

The country defaulted on its debt in March for the first time in its history.