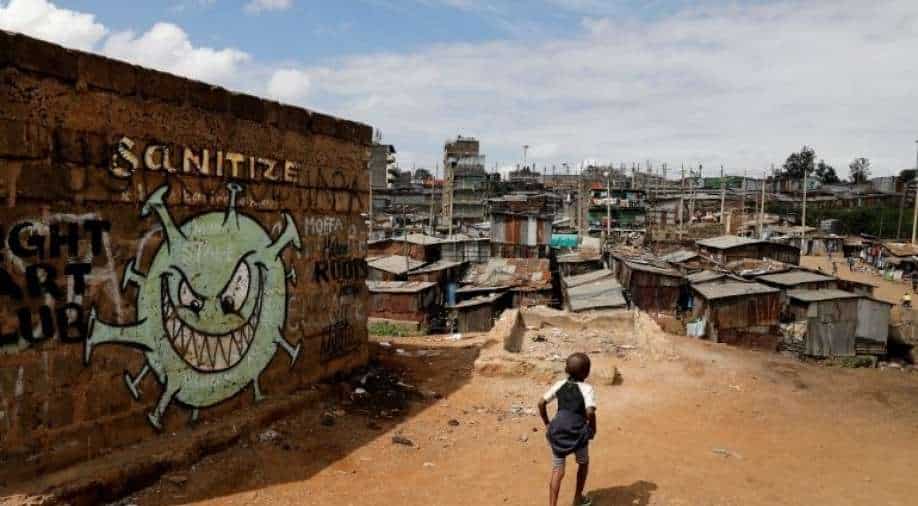 A boy walks in front of a graffiti promoting the fight against the coronavirus disease (COVID-19) in the Mathare slums of Nairobi, Kenya, May 22, 2020 Photograph:( Reuters )

Kenya, which has so far reported 111,935 positive cases and 1,901 deaths in total, registered 829 new infections on Thursday, the highest daily number since December

Kenya, which has so far reported 111,935 positive cases and 1,901 deaths in total, registered 829 new infections on Thursday, the highest daily number since December.

In a televised address, Kenyatta said the positive test rate hit 13% in March compared to January's 2%.

"Unfortunately, it is still rising," he said.

Lockdowns and other restrictions to contain coronavirus contagion have stifled revenues and hampered growth in Kenya.

"Last year, fellow Kenyans, the Kenyan economy was projected to grow by 6.2%, but it only grew by 0.6% because of the COVID-19 pandemic," Kenyatta said, adding that the economy was likely to bounce back and grow by approximately 7% in 2021.

Kenya plans to vaccinate 1.25 million people by June and another 9.6 million in the next phase. [nL5N2L31VA]

The ministry of health said this week that the country aims to inoculate about 15 million people nationwide, about 30% of the country's population, by the end of June 2023.

"Kenya is entering a critical phase in the management and control of the pandemic, with the arrival currently of World Health Organization-prequalified COVID-19 vaccines," Kenyatta said.

Kenya began inoculating people last week with the vaccine produced by Anglo-Swedish drugmaker AstraZeneca. Kenyatta said the shot "has been tested and our own medical experts are persuaded that its safety profile is bankable."

European regulators have dismissed scattered reports of blood clots in people who received the AstraZeneca vaccine, but on Friday Thailand joined a handful of European countries in suspending use of the shot.

In other new measures to curb the spread of the virus, Kenyatta banned political gatherings for 30 days, ordered strict limits on attendance at church services and told bars and restaurants to close by 9 p.m.