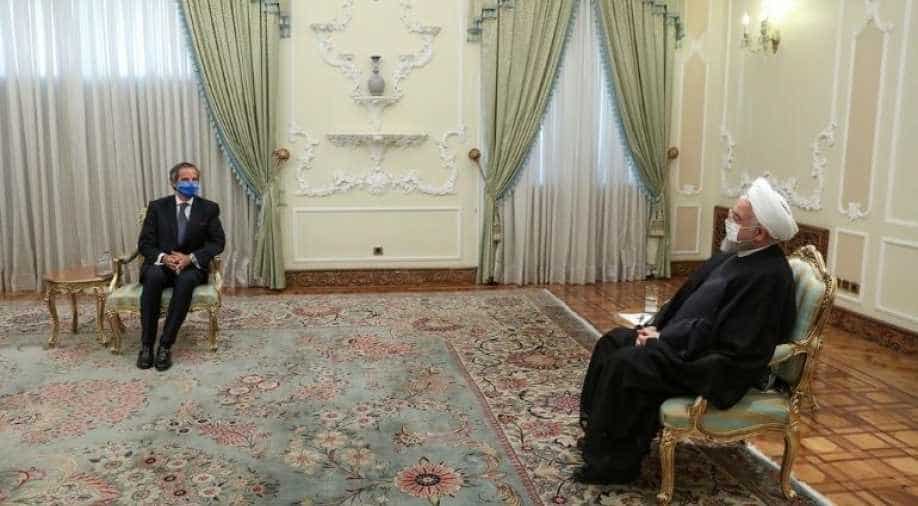 US intelligence services and the IAEA believe Iran had a clandestine nuclear weapons programme that it halted in 2003. The Islamic Republic has long denied seeking to develop atomic bomb

Iran said on Wednesday it was ending a months-long standoff with the U.N. nuclear watchdog by granting it access to two sites suspected of once hosting secret activities, easing diplomatic pressure on Tehran as Washington seeks to reimpose sanctions.

Wednesday`s breakthrough in the dispute over the sites was announced in a joint statement by Tehran and the International Atomic Energy Agency during IAEA Director General Rafael Grossi`s first visit to the Islamic Republic since he took over the role in December.

"Iran is voluntarily providing the IAEA with access to the two locations specified by the IAEA," Grossi and Iran`s nuclear agency chief, Ali Akbar Salehi, said in a joint statement, confirming an earlier report by Reuters.

It said dates for IAEA inspectors to visit the sites - one near Karaj west of Tehran, the other near Isfahan in central Iran - had been agreed, without naming them, as well as the parameters of "verification activities" there.

In March Grossi informed his agency that Iran had denied IAEA inspectors access to the two sites, where uranium conversion and explosives testing are suspected of having been carried out in the early 2000s. Demolition and other work that might have removed traces of the past - "sanitization" in inspectors` parlance - appear to have since occurred there.

The IAEA had demanded access to the sites since January because they are suspected of having hosted nuclear material, which the agency must fully account for in order to verify that a country`s nuclear activities are entirely peaceful.

Under a 2015 deal with major powers, Iran is implementing the so-called Additional Protocol, an agreement with individual member states that grants the IAEA the power to carry out snap inspections, even of places not declared to be nuclear sites.

While the Vienna-based agency says it has the right to go to the sites without permission, Iran objected because at least some of the information pointing to the sites came from a trove of documents on its past activities that Tehran`s main Middle East adversary Israel says it seized in Iran.

US intelligence services and the IAEA believe Iran had a clandestine nuclear weapons programme that it halted in 2003. The Islamic Republic has long denied seeking to develop atomic bombs.

'That's all for now'

Wednesday`s statement said that, at least for now, the IAEA does not want access to more undeclared sites.
It is still, however, seeking answers on the origin and whereabouts of a uranium metal disc that may have been at a third site that it sees no point in going to because of "extensive sanitization and levelling" there in 2003 and 2004.

"In this present context, based on analysis of available information to the IAEA, the IAEA does not have any further questions to Iran and further requests for access to locations other than those declared by Tehran," the statement said.

While Wednesday`s deal must still be followed through on and will begin a process of taking samples and checking the origin of any nuclear particles that are found, it marks an initial victory for Grossi and his agency, whose 35-nation Board of Governors passed a resolution in June raising pressure on Iran.

It also comes as the United States, despite having pulled out of world powers` deal with Iran in 2018, is seeking to use a mechanism available to parties to the deal to trigger the reimposition of global U.N. sanctions against Tehran that were lifted under the 2015 accord.

Wednesday`s agreement "will end the case (of the two sites)", Salehi told Iranian state TV, while reiterating that Iran will not accept any demands beyond its commitments under the 2015 accord.