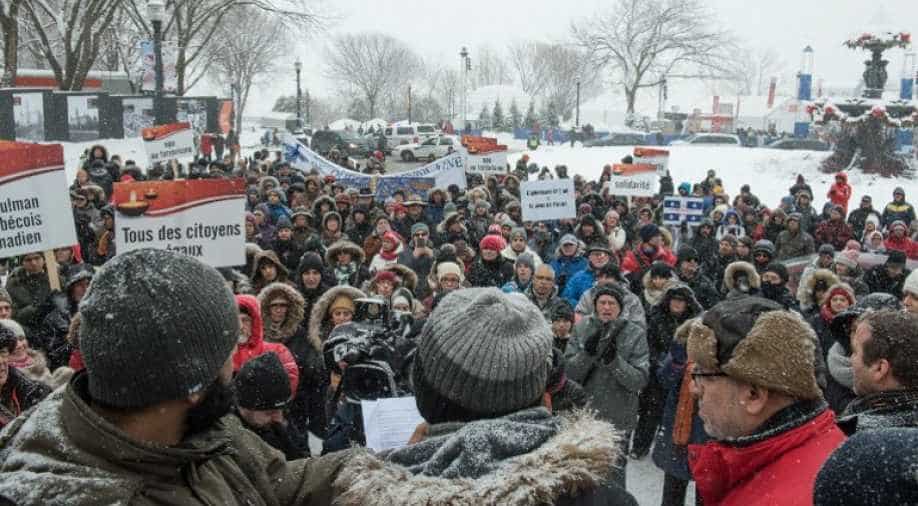 "No to Islamophobia, Yes to Peace", "Open Your Heart" and "No to Terrorism" were the messages on some of the signs and banners carried by marchers, many of them Muslim. Photograph:( AFP )

Several hundred people braved snow and cold Sunday in Quebec City to honour the six men shot to death a week earlier while praying at a local mosque.

"No to Islamophobia, Yes to Peace," "Open Your Heart" and "No to Terrorism" were the messages on some of the signs and banners carried by marchers, many of them Muslim.

The victims included two Algerians, a Tunisian, a Moroccan and two Guineans, all holding Canadian citizenship as well.

They had been attending evening prayers at their mosque when a gunman stormed in and unleashed a barrage of bullets from a pistol and a semi-automatic rifle.

Eight other men were wounded -- three remain hospitalised -- in one of the worst attacks on the Muslim community of a Western nation.

The suspect, Alexandre Bissonnette, 27, surrendered to police and was charged with six murders and five attempted murders.

The march Sunday began not far from the mosque, at Laval University, where the presumed killer was a student, before proceeding to the national assembly of the French-speaking province.

In a display of solidarity, organisers paired Muslim and non-Muslim marchers for the procession.

Mohamed Yangi, president of the Islamic Cultural Center of Quebec, where the mosque was located, said the march provided an opportunity to show a "unified" Quebec.

He said he wanted to work with political leaders to help "eliminate messages of hate."

Canadian politicians, led by Prime Minister Justin Trudeau, have denounced the words or acts of those who target Muslims.

On Friday, at the funeral of three victims, Trudeau blasted radio commentators and politicians who have fanned tensions.