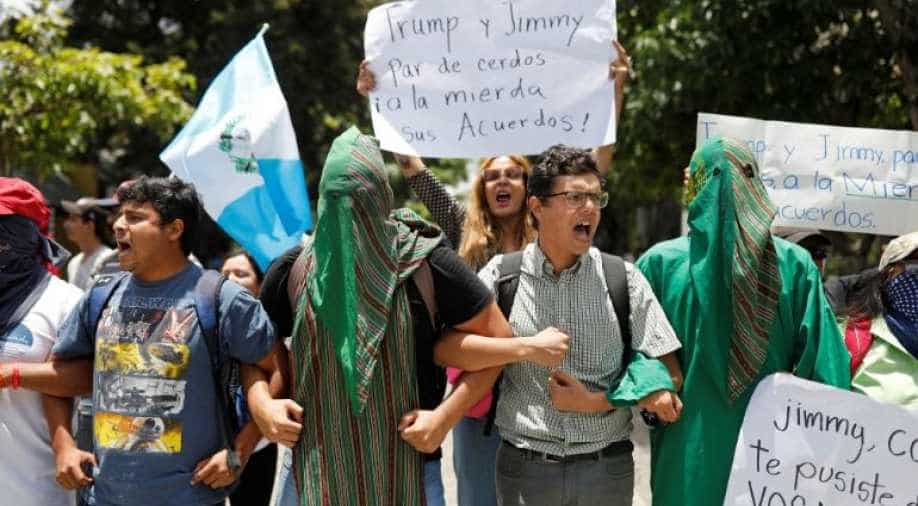 Demonstrators hold a protest outside a hotel where lawmakers are working on a 'safe third country' agreement, that requires asylum seekers travelling to the United States to first pursue safe haven in Central American countries, in Guatemala City, Guatemala. Photograph:( Reuters )

US President Donald Trump has pushed Mexico and Guatemala to sign such agreements to make asylum-seekers passing through their territory solicit haven in those countries, and not in the United States.

Guatemala`s refugee agency meets only sporadically and operates on a bare-bones basis, adding to doubts about how the crime-wracked, impoverished Central American country will cope with a surge in asylum-seekers under a deal signed with Washington.

Under Friday`s accord, Guatemala becomes a so-called "safe third country," turning it into a buffer zone for migrants trying to reach the United States, and potentially lifting applications for asylum in Guatemala from a few hundred a years to tens of thousands.

US President Donald Trump has pushed Mexico and Guatemala to sign such agreements to make asylum-seekers passing through their territory solicit haven in those countries, and not in the United States.

Mexico has so far refused, but under pressure from Trump it has accepted taking in Central American migrants while their applications for asylum in the United States are processed by US courts.

Guatemala only agreed after Trump threatened to impose what President Jimmy Morales described on Facebook as "drastic" economic sanctions against the country, which is heavily dependent on billions of dollars in remittances sent home by Guatemalans in the United States.

Asylum applicants, migration experts and critics of the deal say Guatemala, which itself sends tens of thousands of migrants to the United States each year, has the scant capacity to process asylum-seekers, never mind keep them safe.

"Asylum infrastructure in Guatemala and other parts of the region is still under development," said William Spindler, senior external engagement coordinator for Latin America at the United Nations` refugee agency UNHCR.

"So the number of individual asylum-seekers who can be received and processed with adequate protection guarantees is still limited."

Decisions about whether to grant asylum fall to Guatemala`s National Commission for Refugees (CONARE), an agency represented by officials from the ministries of foreign relations, interior, labour and migration who meet periodically to adjudicate claims.

The CONARE "is not an office as such, and meets only to analyse, grant and deny shelter," said Alejandra Mena, a spokeswoman for Guatemala`s General Directorate of Migration.

Compared to the United States and neighbouring Mexico, which has received tens of thousands of asylum applicants, the numbers of applicants in Guatemala has been negligible.

As such, CONARE met only twice between 2013 and 2014, according to a 2018 UNHCR document. Meetings since that year have increased after a jump in applications, it said.

Between 2002 and 2014, the document said, CONARE analysed an average of seven cases per year. From 2015, applications began accelerating, and so far in 2019, CONARE has received 226. But none of those has yet been approved, said Mena.

Critics say that backlog could spell trouble for the deal, which was immediately called into question by the two contenders battling to assume Guatemala`s presidency in 2020.

"If you can`t deal with 60 or 100 requests, what will you do when you receive hundreds?," said Mauro Verzeletti, director of a migrant shelter in Guatemala City.

Oscar, 47, a public health technician from Honduras who declined to give his last name out of fear of reprisals, said he had been waiting six months for asylum in Guatemala.

He fled the violent Honduran city of San Pedro Sula after officials harassed him for investigating the murders of LGBTQ individuals, including a friend, he said.

In Mexico, he joined a caravan of migrants, but fell ill and could not manage the long daily treks further north toward the US border.

Oscar eventually ended up back in Guatemala, but he told Reuters the risks he faced just across the border with Honduras were almost the same as at home.

"To me, the idea of a `safe country` is a country without corruption, without violence, that gives us work, home and food, but Guatemala has no jobs (even) for Guatemalans," Oscar said.

"It`s not that I`m ungrateful, but Guatemala has the same conditions as Honduras," he added.

People from Honduras, Guatemala and El Salvador make up the bulk of the migrants caught on the US-Mexican border, and the so-called Northern Triangle countries have some of the highest murder rates in the Americas.

Since January, Oscar has had two interviews at Guatemala`s migration directorate, which granted him a provisional residence permit he must renew every month. Still, migrant shelters only allow three-day stays, and finding work has been tough, he said.

The US-Guatemala agreement faces other challenges.

On July 14, Guatemala`s Constitutional Court ruled that Morales could not sign a safe third country agreement without congressional approval, an obstacle that the two presidential candidates pointed to last weekend.

Interior Minister Enrique Degenhart, who signed the deal in Washington, and Foreign Minister Sandra Jovel on Monday denied that Guatemala had reached the agreement under duress.

"We were not coerced, pressured, or forced to sign anything at all," Degenhart said.