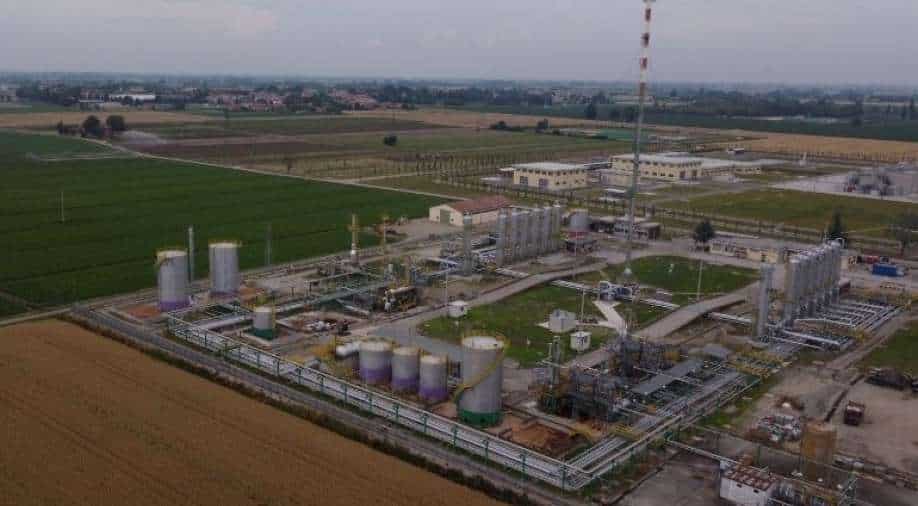 An aerial view of the SNAM underground gas storage facility in Minerbio, Italy Photograph:(Reuters)
Follow Us

Methane, the biggest cause of climate change after carbon dioxide (CO2), is the main component of natural gas and over 80 times more potent than CO2 in its first 20 years in the air

The potent greenhouse gas methane is spewing out of natural gas infrastructure across the European Union because of leaks and venting, video footage made available to Reuters shows.

Methane, the biggest cause of climate change after carbon dioxide (CO2), is the main component of natural gas and over 80 times more potent than CO2 in its first 20 years in the air.

Currently, the EU does not regulate methane emissions in the energy sector, meaning companies running the sites surveyed by CATF are not breaking laws because of leaks or venting.

While some member states require firms to report some emissions there is no overarching framework forcing them to monitor smaller leaks, or fix them.

The EU is proposing laws this year that will force oil and gas companies to monitor and report methane emissions, as well as improve the detection and repair of leaks.

In the energy sector, methane is emitted intentionally through venting and by accident from sites such as gas storage tanks, liquefied natural gas (LNG) terminals, pipeline compressor stations and oil and gas processing sites.

CATF visited over 200 sites in seven EU countries and filmed emissions with the infrared camera in public vantage points to detect hydrocarbons invisible to the naked eye, such as methane.

"Once you see it, you can't unsee it," said CATF's James Turitto, who filmed the emissions. "If we have any hope of achieving only a 1.5 Celsius rise in average global temperatures, we must stop these leaks."

Turitto said over 90% of the sites he visited in the Czech Republic, Hungary, Italy, Poland and Romania were emitting methane while his hit rate in Germany and Austria was lower.

A selection of the CATF thermography, which shows hydrocarbons and volatile organic compounds, was reviewed by five technical experts contacted by Reuters.

Given emissions were at installations handling natural gas - and methane is its main component - they concluded the emissions recorded by CATF were almost certainly methane.

At one gas plant owned by Italy's Eni near the town of Pineto on the country's Adriatic coast, methane appears to be leaking from a rusty hole in the side of a tank.

The footage captures a snapshot of each site's emissions on a given day so it cannot quantify the amount of methane being emitted over longer periods.

What it does reveal is emissions that could be avoided if infrastructure owners used commercially available measurement and abatement technology, emissions experts said.

"If there are cracks in the storage tanks, it is a relatively easy fix to patch the tanks," said Jonathan Dorn, an air quality expert at Abt Associates.

Turitto said he called an emergency number for reporting leaks at the Eni site but the line was dead.

Eni said the leak at Pineto was from a water tank which would have had negligible amounts of gas and that it had been detected and fixed during regular maintenance.

"We are strengthening our efforts in the implementation of periodic leak detection and repair monitoring campaigns," Eni said, adding that it was supportive of EU regulations to address methane emissions.

Brussels put energy companies on notice in October that it would target them with new rules on gas leaks and was also considering restrictions on venting or flaring of methane.

"The Commission calls on companies in the oil, gas and coal sectors to set up more robust leak detection and repair programmes to prepare for upcoming proposals for legislation that would make such programmes mandatory," it said.

An EU official told Reuters this month that because the EU has few methane "super emitters", the legislation would focus on tackling the smaller but far more frequent emissions that occur throughout energy sector infrastructure.

"The first thing is to really try to address these more diffused emissions of methane, covering the whole energy sector," the official, who declined to be named, said.

Experts say the new rules will shake things up for every oil and gas firm in Europe, not least because the EU is considering forcing companies to find and fix even the smallest leaks.

"Each company has a lot to do," said Andris Piebalgs, professor at the Florence School of Regulation and a former EU energy commissioner.

It is unlikely the new rules would take effect before 2023 but Brussels wants to get them in place early enough to contribute to its goal of cutting net emissions of all greenhouse gases by 55% by 2030 from 1990 levels.

The EU is not alone. US President Joe Biden's administration plans to propose new rules this year to reduce methane emissions.

CATF's footage shows Italian energy company SNAM was venting hydrocarbons consistently over three dates during a two-week period from two stacks at its Panigaglia LNG terminal near La Spezia on the Mediterranean coast.

Tim Doty, a consultant in thermographic imaging in the energy sector and a former official at the Texas Commission on Environmental Quality, said the footage showed the stacks were "openly venting hydrocarbon emissions".

At a SNAM underground storage facility at Minerbio near Bologna, the infrared footage showed a plume of methane flowing out of a vent stack.

SNAM said it was a member of the Oil and Gas Methane Partnership (OGMP), a voluntary group of energy companies that is committed to improving methane measurement and abatement. Eni is also a member.

"Emissions recorded by CATF at the Minerbio and Bordolano storage sites are fugitive emissions resulting from blowdown valves that are internally leaking ... the full replacement, starting in 2021, will be completed in 2024," SNAM said.

"The (Panigaglia) emission recorded by CATF at the vent stacks was due to the temporary mechanical failure of an air compressor," it said. "We are confident to be able to fix the air compressor during the second half of 2021."

An expert with nearly two decades of experience at major oil companies who advises U.S. firms and authorities on methane emissions said the CATF footage showed the EU had a problem.

"There is this urban legend that the U.S. natural gas system is disproportionately leaky compared to the rest of the world," said the expert, who declined to be named. "When I look at these videos, they don't seem very different than the United States."

Globally, the concentration of methane in the atmosphere is rising. The U.N. said in April that without deep cuts in methane emissions this decade, the Paris Agreement's goal of limiting warming to 1.5 Celsius would slip out of reach.

Once methane is in the atmosphere, it is all but impossible to trace it back to a specific source which means better monitoring at the point of emission is key.

A growing web of satellites searching for methane means major leaks of thousands of tonnes a year are easier to identify but many smaller leaks go unnoticed.

In Hungary, the footage showed a MOL site which separates gas from oil venting emissions.

The Hungarian energy company said it was aware of the emissions and they were an unavoidable part of normal and safe operations to avoid pressure building up in storage tanks.

MOL said there were no existing regulations requiring it to measure or report emissions but it aimed to end routine methane emissions from gas activities by 2030.

In Austria, at an OMV oil facility near onshore wells north of Vienna, the camera showed a number of smaller leaks.

OMV said it fully supported new EU methane rules. It said the minor leaks at the site had been fixed and it was planning to replace pressure regulation systems that release methane with equipment that stops such emissions.

"The presence of these emissions indicates that this site has ongoing maintenance issues," said Doty, pointing to four different sources. "These emissions are very troubling."