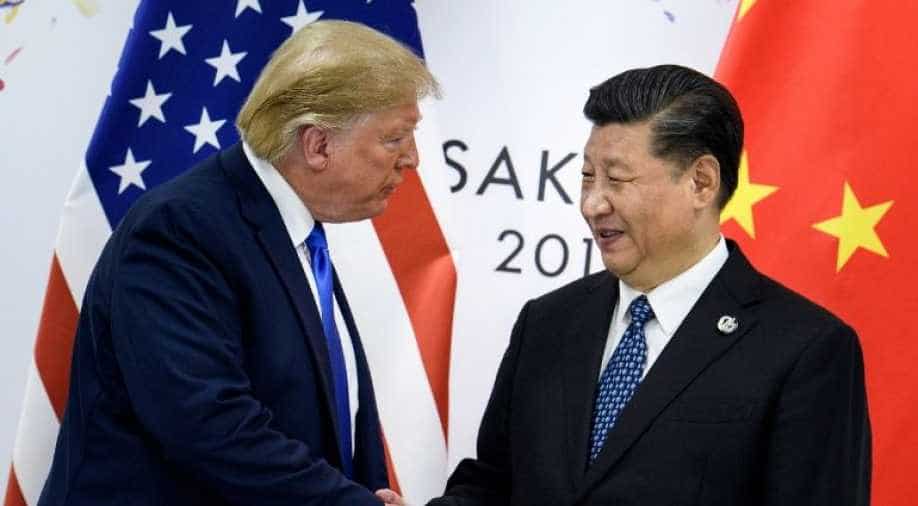 The crunch talks on the damaging trade war between the world's top two economies came on the sidelines of a meeting of the G20 in Japan's Osaka, with all eyes on whether the pair would agree to a truce.

US President Donald Trump said trade negotiations with China were "back on track" after "excellent" talks Saturday with his Chinese counterpart Xi Jinping in which Washington agreed to hold off on new tariffs.

The crunch talks on the damaging trade war between the world's top two economies came on the sidelines of a meeting of the G20 in Japan's Osaka, with all eyes on whether the pair would agree to a truce.

"We had a very good meeting with President Xi of China," Trump said after the talks. "I would say excellent."

"We are right back on track," he added.

Both sides were expected to issue official formal statements later, but Trump confirmed that Washington had committed not to impose any new tariffs on Beijing's exports and that the two sides will continue talks.

"At least for the time being," Washington will not impose new tariffs or remove existing ones, Trump said at a press conference. "We will be continuing to negotiate."

The outcome was likely to be seen as a win, with experts cautioning ahead of the meeting that a full agreement was unlikely but a truce that avoided a new tit-for-tat round of tariffs would be positive.

Trump has struck a conciliatory tone since his arrival in Japan for the G20 summit, despite saying China's economy was going "down the tubes" before he set out for Osaka.

He said he was ready for a "historic" deal with China as the leaders kicked off their meeting and Xi told him that "dialogue" was better than confrontation.

In their final statement, the G20 leaders admitted that "most importantly, trade and geopolitical tensions have intensified," echoing hard-won language from their finance ministers at a meeting earlier this month.

There were no immediate details about the China-US discussions, including whether they raised the thorny subject of Chinese telecoms firm Huawei.

Washington has banned the company over security concerns and China reportedly wanted the restrictions listed under the terms of any trade truce.

The first tete-a-tete between the leaders of the world's top two economies since the last G20 in December has cast a long shadow over this year's gathering in Osaka.

Economists say that a lengthy trade war could be crippling for the global economy at a time when headwinds including increased geopolitical tensions and Brexit are blowing hard.

On Friday, the European Union and the South American trade bloc Mercosur sealed a blockbuster trade deal after 20 years of talks, with European Commission President Jean-Claude Juncker hailing it as a "strong message" in support of "rules-based trade."

Trade has proved far from the only contentious issue on the table, with climate change becoming another major sticking point.

A diplomatic source said it had been a "difficult" night, with an American negotiator pushing a "very tough position" and a group including France standing united against watering down the climate language in the final statement.

In the end, a deal of sorts was reached, with 19 members, minus the United States, agreeing Saturday to the "irreversibility" of the Paris climate deal and pledging its full implementation.

The language in the final statement after the summit in Japan's Osaka mirrors that agreed during last year's G20 but was the subject of lengthy negotiations after objections from the United States.

Trump has dominated the headlines from the summit, and once again caught observers by surprise by tweeting early Saturday that he was open to meeting North Korea's Kim Jong Un while in South Korea this weekend.

"If Chairman Kim of North Korea sees this, I would meet him at the Border/DMZ just to shake his hand and say Hello(?)!," he wrote.

Several experts, however, said the focus on Trump and the talks with China struck at the heart of the G20 format, created to craft a united global response to the Lehman Brothers crisis.

"With much of the fate of the global economy and the likely direction of markets hanging on the outcome of this pivotal Trump-Xi meeting, we think things will get worse before they get better," said ING Economics.

And the focus on bilateral meetings on the sidelines of the summit once again sparked doubts about the future of the gathering, experts said.

"The G20 was created as a forum for cooperation and the question may well be 'have we reached the point where it can no longer serve that purpose'," Thomas Bernes from the Centre for International Governance Innovation told AFP.