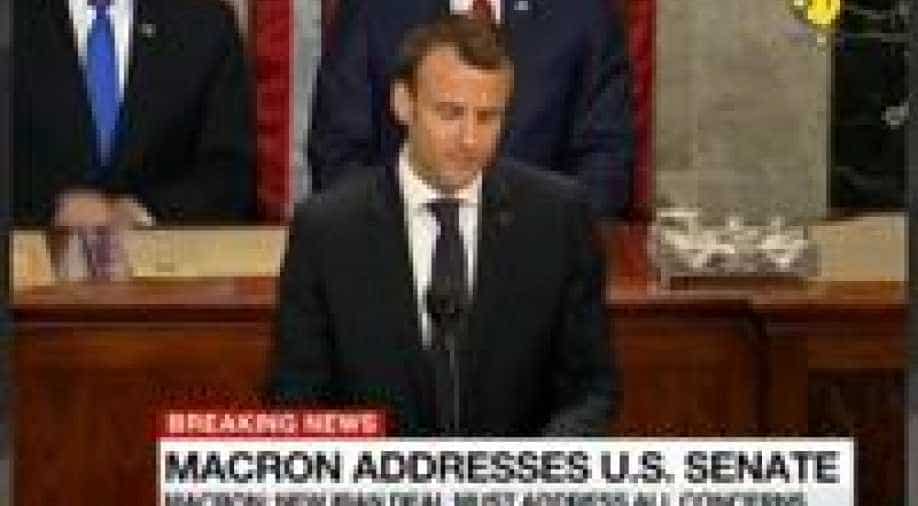 Macron also said the United States, France and other allies will have a 'very important' role to play in rebuilding Syria

French President Emmanuel Macron said he has no "plan B" for the Iran nuclear deal and that the United States should stay in the agreement as long as there is no better option.

In a Fox News interview on Sunday, the day before he arrives in Washington for a three-day state visit, Macron also said the United States, France and other allies will have a "very important" role to play in rebuilding Syria after they defeat Islamic State militants.

President Donald Trump has said he wants US&nbspforces to leave Syria as quickly as possible, but Macron warned that Iran, which has been Syrian President Bashar al-Assad's most supportive ally, will overrun Syria if the countries exit too quickly.

Macron and Trump will discuss the Iran nuclear agreement at the White House on Tuesday, a senior US&nbspadministration official said on Friday. They will also discuss the joint military strike on Syria this month following a suspected chemical weapons attack near Damascus, the official said.

The 2015 deal reached between Iran, the United States and five other world powers put curbs on Iran's nuclear program in exchange for sanctions relief.

"I don't have any plan B," Macron said. "Let's present this framework because it's better than the sort of North Korean-type situation."

Macron, who said he and Trump have "a very special relationship," said he wanted to complete the Iran deal by addressing ballistic missiles and working to contain Iran's influence in the region.

Trump has called it one of the worst deals ever negotiated and will decide by May 12 whether to restore US&nbspeconomic sanctions on Tehran, which would be a severe blow to the pact. Trump has pressured European allies to work with Washington to fix the deal.

Iranian Foreign Minister Mohammad Javad Zarif said in a CBS interview on Sunday the United States would be viewed as an unreliable partner to the international community if it pulls out of the deal. He added that there would be no reason for Iran to remain in the deal if the United States leaves and the benefits for Iran start to diminish.

"This would be a very bad precedent if the United States sends this message to the international community that the length or the duration of any agreement would depend on the duration of the presidency," Zarif said.