For Ukraine’s refugees, Europe opens doors that were shut to others 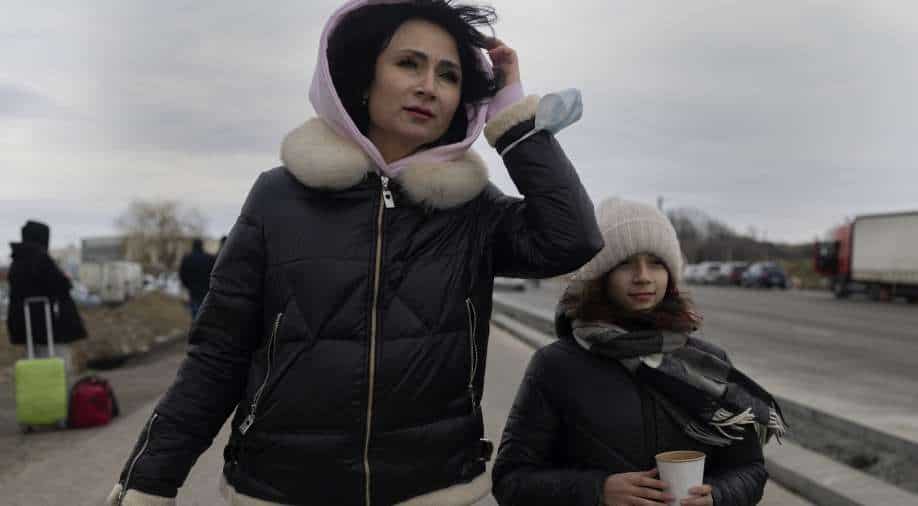 Russia’s invasion of Ukraine has pushed tens of thousands of people out of their homes and fleeing across borders to escape violence. But unlike the refugees who have flooded Europe in crises over the past decade, they are being welcomed.

Countries that have for years resisted taking in refugees from wars in Syria, Iraq and Afghanistan are now opening their doors to Ukrainians as Russian forces carry out a nationwide military assault. Perhaps 100,000 Ukrainians already have left their homes, according to United Nations estimates, and at least half of them have crowded onto trains, jammed highways or walked to get across their country’s borders in what officials warn could become the world’s next refugee crisis.

UN and US officials described their concerted diplomatic push for Ukraine’s neighbors and other European nations to respond to the outpouring of need. President Joe Biden “is certainly prepared” to accept refugees from Ukraine, Jen Psaki, the White House press secretary, said Thursday, but she noted that the majority of them would probably choose to remain in Europe so they could more easily return home once the fighting ended.

“Heartfelt thanks to the governments and people of countries keeping their borders open and welcoming refugees,” said Filippo Grandi, head of the UN refugee agency. He warned that “many more” Ukrainians were moving toward the borders.

That means thousands will end up in countries led by nationalist governments that in past crises have been reluctant to welcome refugees or even blocked them.

In Poland, government officials assisted by American soldiers and diplomats have set up processing centers for Ukrainians. “Anyone fleeing from bombs, from Russian rifles, can count on the support of the Polish state,” Polish Interior Minister Mariusz Kaminski told reporters Thursday. His government is spending hundreds of millions of dollars on a border wall, a project it began after refugees and migrants from the Middle East tried to reach the country last year but ended up marooned in neighboring Belarus.

The military in Hungary is allowing in Ukrainians through sections of the border that had been closed. Hungary’s hard-line prime minister, Viktor Orban, has previously called refugees a threat to his country, and his government has been accused of caging and starving them.

Farther west, Austrian Chancellor Karl Nehammer said that “of course we will take in refugees if necessary” in light of the crisis in Ukraine. As recently as last fall, when he was serving as interior minister, Nehammer sought to block some Afghans seeking refuge after the Taliban overthrew the government in Kabul.

“It’s different in Ukraine than in countries like Afghanistan,” he was quoted as saying during an interview on a national TV program. “We’re talking about neighborhood help.”

Nehammer also said the number of Ukrainians seeking help was expected to be relatively small. At least 1.3 million people — mostly from Syria, Iraq and Afghanistan — applied for asylum in Europe in 2015 during what was widely regarded as the worst refugee crisis since World War II, stretching national budgets and creating a backlash of political nativism in countries across the continent.

Some estimates project that at least 1 million refugees will flee Ukraine because of the Russian invasion. Linda Thomas-Greenfield, U.S. ambassador to the United Nations, said Thursday that the fighting could uproot as many as 5 million people, “putting pressure on Ukraine’s neighbors.”

Diplomats and experts said European states willing to take in Ukrainians might be trying, in part, to highlight Russian aggressions against civilians by offering a humanitarian response.

“If you think of causing the refugee crisis as one of Putin’s tools to destabilise the West, then a calm, efficient, orderly response is a really good rebuke to that,” said Serena Parekh, a professor at Northeastern University in Boston and director of its politics, philosophy and economics program.

“On the other hand,” said Parekh, who has written extensively about refugees, “it’s hard not to see that Ukrainians are white, mostly Christian and Europeans. And so in a sense, the xenophobia that’s really arisen in the last 10 years, particularly after 2015, is not at play in this crisis in the way that it has been for refugees coming from the Middle East and from Africa.”

The Biden administration is also facing calls to take in Ukrainian refugees, much in the way it gave residency or humanitarian parole to more than 75,000 Afghans when the Taliban seized power in August.

It is unlikely — at the moment, at least — that the United States would offer a humanitarian parole program for Ukrainians that goes above what is currently allowed for the total number of refugee admissions for the current fiscal year. That number is capped at 125,000 this year — including 10,000 refugees from Europe and Central Asia. The guidelines set aside another 10,000 slots for refugees from any part of the world as regional emergencies warrant.

Psaki did not comment when asked by a reporter whether the administration would offer temporary residency protections, a program known as TPS, to Ukrainian students, workers and others who are in the United States to ensure they are not deported when their legal visas expire.

“The war in Ukraine is exactly the type of crisis TPS was created for — to allow people to live and work in the United States when they are unable to return home safely,” Sen. Bob Menendez, D-N.J., chair of the Foreign Relations Committee, said Thursday night.

Psaki said the United States had sent an estimated $52 million in humanitarian aid to Ukraine over the past year to help people, mostly in the eastern Donbas region, where the current war began as a slow-burn conflict between Ukraine’s military and Russian-backed separatists in 2014. Nearly 1.5 million people had been forced from their homes by the fighting even before the invasion this past week.

Additionally, the US Agency for International Development sent a team of disaster experts to Poland in the past week to assess demand for aid to the region — including water, food, shelter, medicine and other supplies — and to coordinate its delivery. Hours after the invasion began, the United Nations announced it would divert $20 million in emergency funds for humanitarian assistance to Ukrainians, mostly to the Donbas region.

A European diplomat who is closely watching the refugee flow from Ukraine said neighboring nations might also feel the pull of history in welcoming people in danger as a direct result of Russia’s aggressions. A Soviet crackdown on a Hungarian uprising in 1956, for example, resulted in 200,000 refugees, most of whom fled to Austria before they were settled in dozens of countries across Europe. Between 80,000 and 100,000 people — and perhaps even more than that — left what was then Czechoslovakia to escape a Soviet invasion in 1968 that was launched to silence pro-democracy Prague Spring protests.

In both cases, the United States sent aid to help European countries settle refugees and, in the Hungarian crisis, “in a matter of months, there were no more refugees; they had been found a permanent home,” Parekh said.

That was largely the result of the United States working with European states to resettle the Hungarians, she said, calling the effort “an exception, historically.”

“It was a similar thing — people fleeing our Russian enemy — that motivated us,” she said.