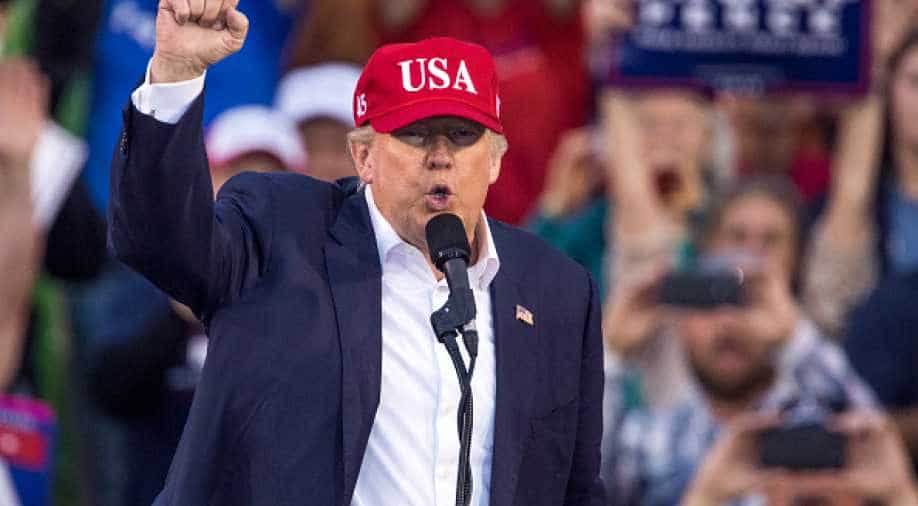 Donald trump is all but certain to become the 45th President of the United states. Photograph:( Getty )

Donald Trump's fiercest critics may be dreaming of a last-minute revolt, but the Electoral College, a peculiarly American institution, appears near-certain on Monday to select the 70-year-old real estate mogul as the 45th US president.

Its detractors -- and they are many -- have denounced an electoral system that flies in the face of the venerated "one man, one vote" principle, and which perversely encourages presidential candidates to campaign in only a few key states while ignoring whole swaths of the country.

But despite the torrent of criticism this method has faced for decades, no reform attempt has ever succeeded.

When American voters cast their ballots on November 8, they did not in fact directly elect the next occupant of the White House. Instead, they picked 538 "electors" charged with translating their wishes into reality.

Trump won a clear majority of those electors -- 306, with 270 needed for election -- despite dramatically losing the popular vote to his Democratic rival, Hillary Clinton.

However, the gap is far more dramatic in 2016, with Clinton scoring nearly three million extra votes over Trump.

This Monday, electors will convene in each of the 50 states, plus the District of Columbia, to officially designate the next president and vice president.

Following an extraordinarily vitriolic campaign, this step in the electoral process -- normally little more than a formality -- has been thrust into the spotlight.

Historically, electors only rarely defy the expressed wishes of the majority of voters in their district. And never have the votes of these "faithless electors" changed the outcome of a presidential election.

Still, some Democrats -- who see a Trump presidency as presenting an existential danger to American democracy -- are clinging to the slender hope that a few dozen Republican electors might decide not to vote for their party's populist leader.

Yet, should that happen, it would be up to the House of Representatives to designate the successor to Barack Obama. And Republicans hold a strong majority there.

An online petition calling on electors to reject Trump, has collected some five million supporters. Hollywood stars including Martin Sheen ("President Bartlet" on the popular television series "West Wing") recently released a video to goad electors to take that step.

"You have the position, the authority and the opportunity to go down in the books as an American hero who changed the course of history," the celebrities say, addressing electors who have been thrust overnight from the shadows into the spotlight.

But these efforts appear to have almost no chance of succeeding: There is no evidence that the requisite 37 Republican electors will decide to abandon Trump. To date, only one of them, Christopher Suprum of Texas, has publicly announced his intention to stage such a revolt.

The future White House chief of staff, Reince Preibus, told Fox News Sunday that the pressure on the electoral college not to elect Trump is "about Democrats that can't accept the outcome of the election. It's about delegitimizing the american system."

He added: "We're very confident that everything is going to be very smooth tomorrow."

The final result may not be known on Monday, as states are given several days to report their numbers. The Congress will, in any case, announce the name of the official winner on January 6, two weeks before the next president is to be inaugurated in a solemn and pomp-filled ceremony outside the Capitol.

Asked about it at his final news conference of the year before leaving for a Hawaiian vacation, Barack Obama acknowledged that the system was "a vestige, it's a carry-over from an earlier vision of how our federal government was going to work," and that it could disadvantage Democrats.

Still, the outgoing president urged his camp to draw needed lessons from their electoral failure and develop a strategy for the future rather than bemoaning the 2016 loss or trying to overturn it.

"The truth of the matter is that if we have a strong message, if we're speaking to what the American people care about, typically, the popular vote and the Electoral College vote will align," he said in a clear allusion to his own presidential victories in 2008 and 2012.

David Pozen, a professor at Columbia Law School, sees at least one silver lining to the intense focus on the Electoral College: it will draw attention to the urgent need for change.

"Either way, the renewed public interest in the Electoral College underscores the need to do away with this antiquated and fundamentally undemocratic institution," he said in an op-ed article in the New York Times.

In November 2000, Hillary Clinton, then the newly elected Democratic senator from New York, issued a clear call for an electoral reform that would result in direct, universal suffrage.

Trump, for his part, has radically changed his stance on the matter in just four years.

"The Electoral College is a disaster for a democracy," he tweeted in November 2012.

Last month, just days after a victory that seemed to stun even him, he sounded a rather different note: "The Electoral College is actually genius in that it brings all states, including the smaller ones, into play. Campaigning is much different!"