Democrats' road to controlling US House runs through Pennsylvania 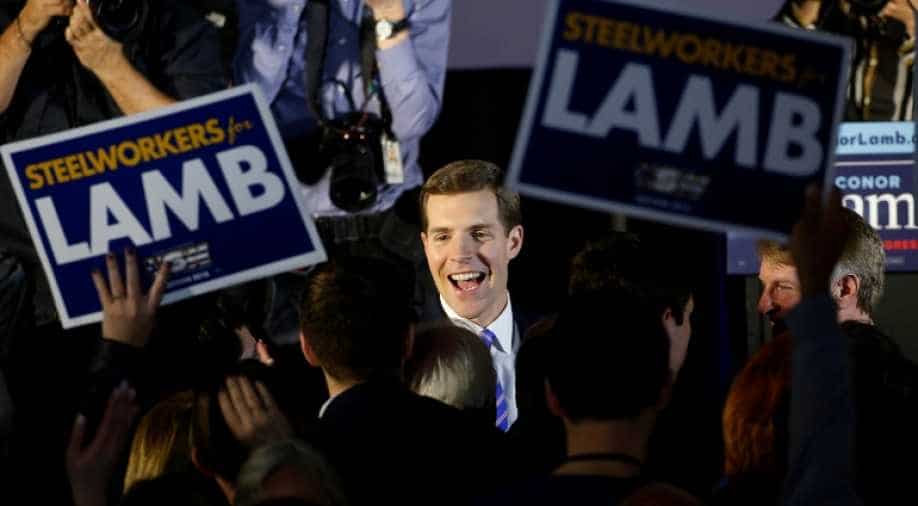 US Democratic congressional candidate Conor Lamb is greeted by supporters during his election night rally in Pennsylvania.. Photograph:( Reuters )

A court-ordered overhaul of Pennsylvania voting districts and stubbornly low approval ratings for Trump in the state have placed Democrats within striking distance of claiming at least half of Pennsylvania's 18 congressional seats in a test of the party's ability to win back working-class voters.

Donald Trump's stunning 2016 White House win got a major boost from sagging Democratic enthusiasm in Pennsylvania, but now the party is poised for big wins on Tuesday in congressional races in the state that could signal which party controls the U.S. House of Representatives.

A court-ordered overhaul of Pennsylvania voting districts and stubbornly low approval ratings for Trump in the state have placed Democrats within striking distance of claiming at least half of Pennsylvania's 18 congressional seats in a test of the party's ability to win back working-class voters.

Take Republican incumbent Keith Rothfus. He won the election in 2012 in Pennsylvania's current 12th district outside Pittsburgh, which includes some staunch Republican strongholds. The 56-year-old attorney was reelected twice by constituents who favoured Trump by over 20 percentage points in 2016.

But redistricting has forced Rothfus into a new 17th district, where only 36 per cent of voters are Republicans and nearly half are Democrats.

The change in Democratic fortunes increases the party's hopes of making the net gain of 23 seats it needs to control the House and stall much of Trump's agenda. Republicans are favoured to hold the Senate.

"Pennsylvania is going to be the bellwether. It is ground zero if you're looking at who's going to control the House," said Mike DeVanney, a Pittsburgh-based Republican strategist.

Democrats, who currently hold six of Pennsylvania's House seats, could win at least nine, according to the University of Virginia Center for Politics, which tracks House and Senate races.

"Anything more than that probably would reflect an outcome in which Democrats won significantly more than the 23 net seats they need," said Center analyst Kyle Kondik.

All told, at least seven House Republican seats once considered safe are now in play as a result of the redrawn map in Pennsylvania.

"We were having elections that did not have two candidates running in them in many of these districts. That doesn't give people a real choice," Lamb told Reuters in an interview. "A citizen deserves to have a competitive election."

Rothfus, who was not available for an interview, has campaigned largely on economic issues, a position that won him an endorsement on Friday from the Pittsburgh Post-Gazette.

"The healthy economy we're seeing is a result of a combination of the Tax Cuts and Jobs Act and the deregulation of small businesses," Rothfus said last month on Twitter. "That's what is putting hard-working Americans to work, and that's what is putting more money in their pockets."

Republicans and Democrats have both tried to use district lines to maximize their power.

The dynamics underlying this year's House races in Pennsylvania, including anger among Democratic and independent voters over Trump, could give Democrats a shot at exceeding their state sweep in 2006, which was a banner year nationally for the party.

The Pennsylvania Supreme Court ordered the state's new district map earlier this year in a ruling that later survived a Republican challenge to the U.S. Supreme Court.

Under the new map, two Republican-held House seats outside Philadelphia where Republican incumbents are stepping down are seen as likely Democratic or safe Democratic wins, according to a Reuters analysis of a trio of political forecasting groups: Cook Political Report, Inside Elections and the University of Virginia's Center for Politics.

A third Republican seat with a retiring incumbent, near the eastern city of Allentown, is rated as leaning Democratic.

Meanwhile, Trump's political style looks to be becoming a liability.

A Franklin & Marshall College survey of likely Pennsylvania voters conducted Oct. 22-28 found that 52 per cent preferred Democratic House candidates. Two out of three viewed that choice as a vote against Trump, who has a 36 per cent approval rate in the state.

Democrat George Scott needs Republican support to defeat Perry in a district including the state capital, Harrisburg. On Thursday, he was able to showcase Republican backing by appearing with about a dozen Republicans, including a former state senator, a former state representative and a staffer to a former Republican governor. Several said Perry had become too partisan in Washington, where he joined the hardline conservative House Freedom Caucus.

Perry, whose campaign declined an interview request, has defended membership in that group.

"It is not a right-wing organization. We take anybody that comes," Perry said in a debate last month, according to local media.

Former state Representative Steve Nickol told Reuters that he supported Perry during his first run for Congress but was dismayed to see him become "radically partisan" in Washington.

"I've talked to even some elected (Republican) officials who are kind of upset with the way things are and feel that Scott (Perry) is a little too extreme in some of his positions," Nickol said.

"They're not about to come out and endorse George, even though they've told me in private that they'll vote for him."

Beer made from urine? Singapore gives ‘getting on the piss’ new meaning