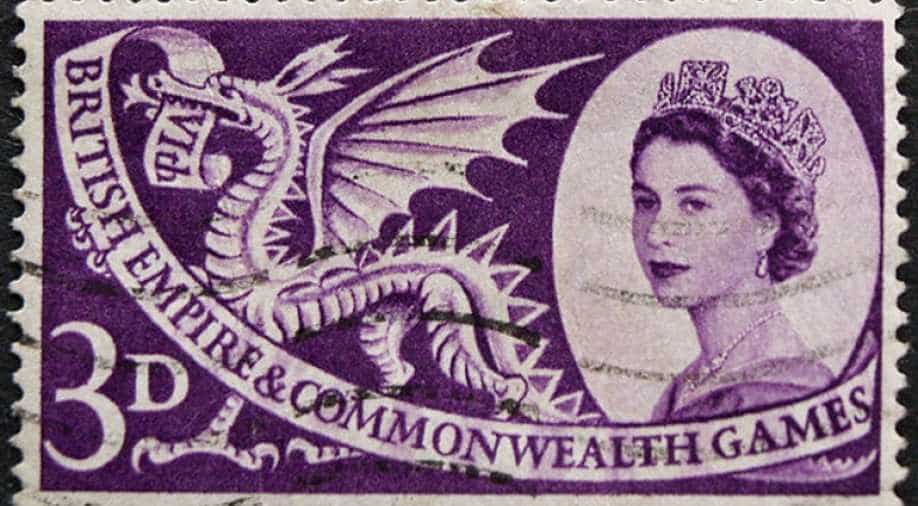 Queen Elizabeth II on a British stamp during the 1958 British Empire and Commonwealth Games. Image source Wikimedia Commons via Scan Gumruch. Photograph:( Others )

Her Majesty Queen Elizabeth's face is on our money and she has a place in our heart. Today's Canada originated as a British colony, but the Queen doesn’t do very much for Ottawa today. Her function can be reduced to this.

Years ago I worked in a downtown Toronto music store that sometimes sold music, but mostly peddled trite action figures of rock stars like Kurt Cobain and also of Queen Elizabeth II. Kurt’s plastic arms could be manipulated to play a plastic guitar, while the Queen waved her hand. The royal wave was automated, a mini solar panel ensuring she kept waving. It very well could still be waving this second. The twee Cobain toy was an insult to the angsty grunge rocker, but the Queen’s didn't just capture the essence of a royal’s entire function, it also performed it.

Yet it’s not true that a life-sized version of this toy could replace Queen Elizabeth in the flesh. I’ve never met Queen Elizabeth, but she seems so lovely! For six decades has carried herself and represented Britain with dignity, tact, and even surprising humour in performing what could otherwise easily be a stiff ceremonial role.

Is this enough to merit Canada keeping an ongoing symbolic connection to Britain’s Royal family, then?

We take for granted that our link to the royals is great because Elizabeth is, and has been seemingly forever. But imagine if overseeing it all was a royal like Philip, a royal doofus. (He retired from royal engagements in May, 2017.) The Queen excels in her job, which is to be presentable in public in exchange for unlimited money. Philip seemed intent on reminding the public of what little merit he has.

First, a topical example. While on a tour of Canada in 1976: “We don’t come here for our health. We can think of other ways of enjoying ourselves.” This is a stupid, needless thing to say for a Royal visiting any country, let alone a former colony. But this is for him highly inoffensive.

Think of the Queen’s dignity, then consider Philip’s 1965 doozy while seeing an exhibition of “primitive” Ethiopian art: “It looks like the kind of thing my daughter would bring back from her school lessons.”

Two years later, “British women can’t cook”. To be fair, from what I understand of British cuisine of the era this was true of its men too.

Immune to maturing, a 65-year-old in 1986 told a World Wildlife Fund meeting “if it has got four legs and is not a chair, if it has got two wings and flies but is not an aeroplane and if it swims and is not a submarine, the Cantonese will eat it.” Prince Philip has spent his career, his life, trying unsuccessfully to get fired from being unemployed.

Can any Canadian imagine this man on our money? Commanding the respect of not just one person, but Canada? We’ve been spoiled by Elizabeth. Today, it’s all too clear that society’s highest public offices and institutions are not automatically treated with dignity because they should be.

As Canada moves forward, rather than look back at British history it should look forward at improving life for its own Indigenous people. It’s not impossible to do both, but the fact that British royals who live overseas are officially venerated while Canada’s Indigenous communities are unofficially marginalised is revealing and telling. Colonialism is at the root of this.

With respect to Her Majesty Queen Elizabeth II, there’s no reason to symbolically worship another Brit for being simply born onto a throne when Canada has already produced Neil Young.