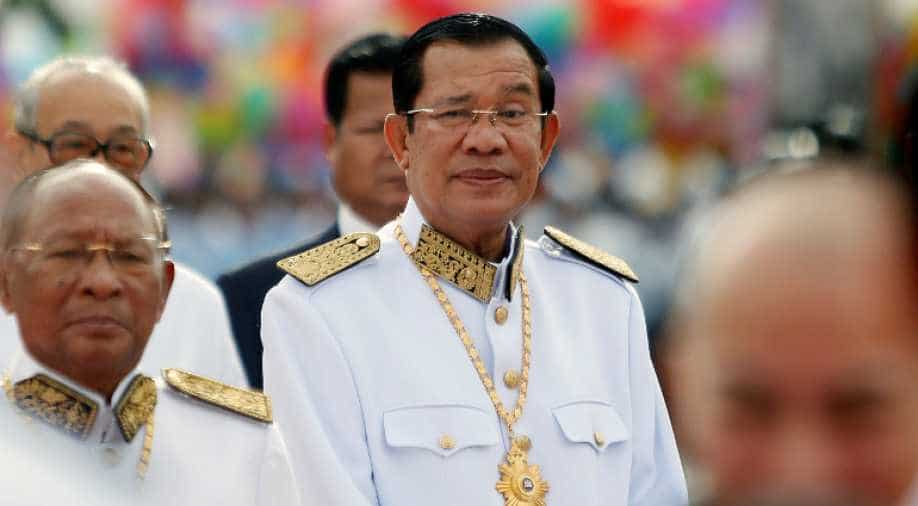 Beijing had been lobbying Cambodia reportedly since 2017 for the naval base, which could host frigates, destroyers and other vessels of the People's Liberation Army Navy.

Cambodian Prime Minister Hun Sen said on Monday there would never be a foreign military base in his country, following a news report that China was lobbying for a naval base in southwest Koh Kong province.

The Asia Times, citing unidentified diplomatic sources and analysts, reported on Thursday that Beijing had been lobbying Cambodia since 2017 for the naval base, which could host frigates, destroyers and other vessels of the People's Liberation Army Navy.

"Does Cambodia need to violate its Constitution to allow a foreign military base on Cambodian territory?" Information Minister Khieu Kanharith quoted Hun Sen as saying on Facebook during a Cabinet meeting on Monday.

"With whom does Cambodia need foreign troops to fight with?," Hun Sen said, according to Khieu Kanharith. "And I do not need foreigners to fight in Cambodian territory like in the past, nor does Cambodia allow her to be a place for ideology or weapon experiment," he said.

The possible naval base is thought to be part of a project by China's Tianjin Union Development Group (UDG), which began work in 2008 on 45,000 hectares of land in a national park for 99 years.

There has been little information about the $3.8 billion project or its progress.

UDG was also to spend $45 million on the port, which The Asia Times report described as a naval base.

Cambodia-based Sawac Consultants for Development, commissioned by Cambodia's environment ministry, said the port would be able to handle up to four 20,000-tonne container ships.

The port was guarded by Cambodian military and appeared unfinished when Reuters visited in June.

The initiative, unveiled by Chinese President Xi Jinping in 2013, aims to bolster a sprawling network of land and sea links with Southeast Asia, Central Asia, the Middle East, Europe and Africa.

It has attracted a flood of Chinese commercial ventures in Cambodia, including casinos and special economic zones.