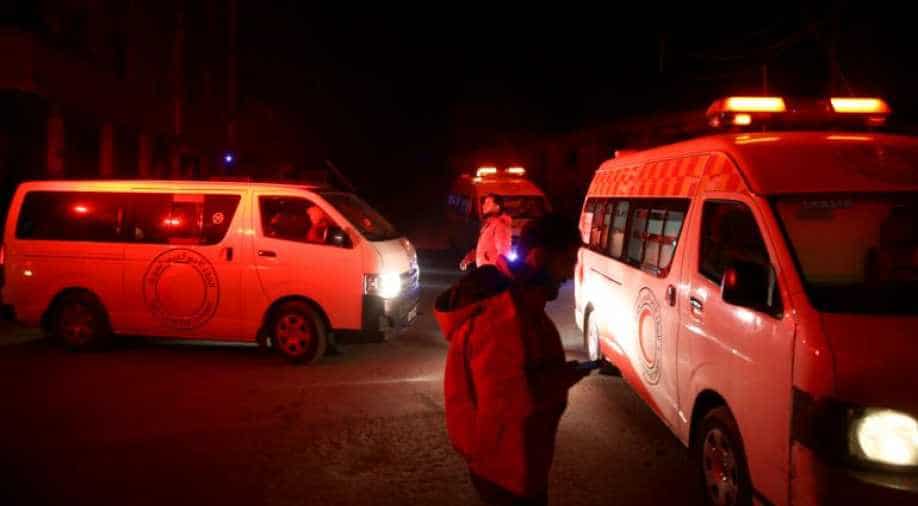 Ambulances are seen during medical evacuation from the besieged town of Douma, eastern Ghouta to Damascus. Photograph:( Reuters )

A second batch of sick Syrian civilians, most of them children, left the besieged rebel enclave of Eastern Ghouta, aid officials said Thursday, but hundreds of critical patients remained trapped.

Four evacuations took place on Tuesday and another group of 12 made it out late Wednesday, but a top humanitarian envoy questioned a deal under which medical emergencies are used as bargaining chips.

A total of 29 emergency medical cases are expected to be evacuated under a deal with the government that saw rebels release 26 individuals, including workers detained during fierce clashes with the army in March.

The numbers are still a far cry from the nearly 500 patients in the Damascus suburb the UN said weeks ago would die if they did not urgently receive better treatment.

"Yesterday we evacuated 12 patients together with their family members, the majority of them are children," International Committee of the Red Cross spokeswoman Ingy Sedky said.

At the Syrian Red Crescent headquarters in Douma, an AFP correspondent saw the latest group of evacuees waiting for ambulances to pick them up.

Among them was Abdel Rahman, a seven-month-old baby with respiratory assistance in his mother`s arms. A Red Crescent worker tried to make another baby smile.

"Most of them suffer from cancer, chronic diseases and heart diseases," Sedky said, adding that the evacuees were transferred to Damascus.

From the list of 500 urgent cases announced in November at least 16 have already died for lack of medical assistance.

Around 400,000 people live in the Eastern Ghouta area on the edge of the Syrian capital.

The enclave is controlled by rebels, the dominant faction among them Jaish al-Islam (Army of Islam), and has been under siege by the government for four years.Jan Egeland, head of the Norwegian

Refugee Council and currently a UN special envoy for humanitarian access in Syria, was critical of the deal that allowed the patients to leave.

The agreement between the rebels and the government was reached with support from Turkey, according to the Syrian Observatory for Human Rights, and led to the release of 26 men held by Jaish al-Islam rebels.

It is "not a good agreement if they exchange sick children for detainees that means children become bargaining chips in some tug of war," Egeland told the BBC.

"That shouldn`t happen. They have a right to the evacuation and we have an obligation to evacuate them," he said.

According to the Observatory, the first five released by the rebels are workers who were caught in the fighting earlier this year.

Among them are civilian hostages who had been held for several years as well as pro-regime fighters, said the British-based monitor`s head Rami Abdel Rahman, without providing further details on the exchange.

It was not immediately clear when the next batch of patients would be evacuated.

Mohammed Alloush, a leader with Jaish al-Islam, said the total number of hostages and prisoners his group would release would match the 29 medical evacuations.

The Eastern Ghouta region is one of four "de-escalation" zones agreed in May in a deal brokered by government backers Russia and Iran and rebel supporter Turkey.

The agreement led to a short-lived reduction in violence but the government kept up its blockade. Dozens have been killed in recent weeks, including civilians struck by rebel shelling on central Damascus.