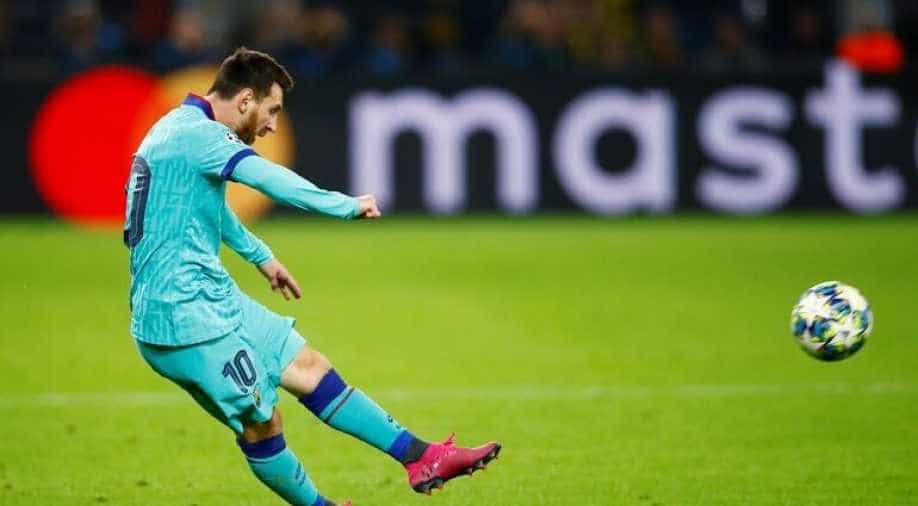 Barca's in-form 16-year-old Ansu Fati became the club's youngest player to feature in a UEFA competition when he started but failed to make any real impact before being replaced by fit-again Messi just before the hour mark.

Borussia Dortmund hit the woodwork and had a penalty saved before drawing 0-0 with Barcelona in their Champions League Group F opener on Tuesday, with Lionel Messi making his first appearance of the season for the Spaniards.

Barca's in-form 16-year-old Ansu Fati became the club's youngest player to feature in a UEFA competition when he started but failed to make any real impact before being replaced by fit-again Messi just before the hour mark.

Even with the Argentine on the field it was the Germans who were more dangerous after captain Marco Reus' 57th-minute penalty was saved by Marc Andre ter Stegen.

Reus was denied twice more by Ter Stegen and Julian Brandt rattled the crossbar with a thundering shot in the 77th.

"It feels terrible," Reus told reporters. "My penalty was badly taken. We could have won it as our performance was good. It would have been the ideal start. But we can build on this."

Finding space in or around the box was virtually impossible for either side in the first half and the expected fireworks between two sides known for their attacking game never materialised.

Dortmund's Jadon Sancho was subdued while Fati showed none of the scoring form that has turned him into the latest football sensation in Spain.

It took Dortmund 25 minutes to carve out their first chance with a fine Thorgan Hazard through ball that sent Reus into the area but his Germany team mate Ter Stegen got the better of him.

Luis Suarez wriggled into the box to create a rare chance and tried to surprise Roman Buerki with a clever shot from a tight angle but the Dortmund keeper did well to guard the near post and palm the Uruguayan's effort wide.

Dortmund, who kept a clean sheet at home through the group stage last season, were then awarded a spot kick when Sancho was brought down but Ter Stegen picked the right corner to stop Reus' penalty. He was on hand again later to block a Reus shot.

Messi's introduction on the hour in the forward's first game since his pre-season injury, gave the Spaniards more pace and he made some darting runs but did not create enough for a goal.

"We suffered a lot," Barca coach Ernesto Valverde told reporters. "It was something we already knew would happen. We lacked depth in the last metres and we did not have as many chances as they had. Fortunately Marc was very good."

In the group's earlier game Inter Milan were surprisingly held to a 1-1 home draw by Slavia Prague.