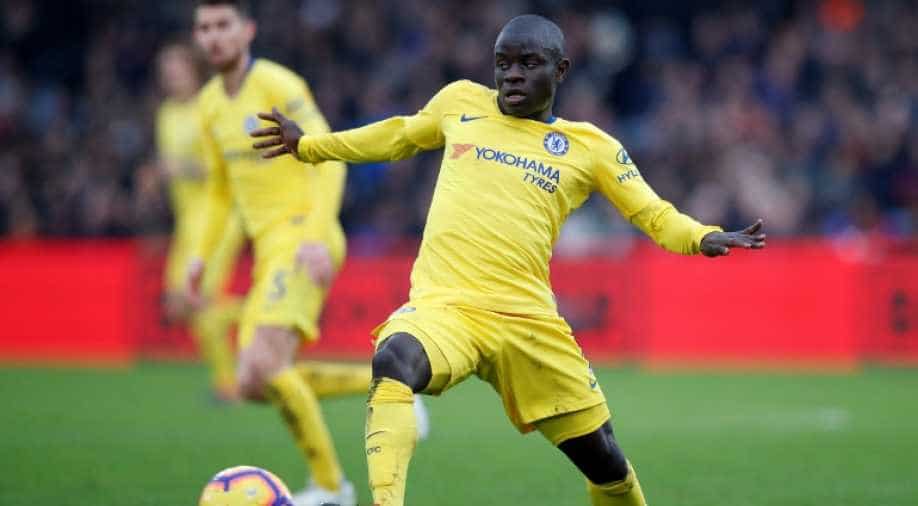 The win also gave Chelsea an important five-point cushion over Arsenal, their nearest challengers for the fourth Champions League spot who were hammered 5-1 by Liverpool on Saturday.

Chelsea kept up their pursuit of the Premier League's top three clubs with a 1-0 win away to London rivals Crystal Palace on Sunday, thanks to a strike by N'Golo Kante early in the second half.

Chelsea had to work hard to break down Palace who had taken seven points in their previous three matches, including a shock win over champions Manchester City, but seemed content to allow their visitors most of the possession.

After a sterile first 35 minutes, Willian smacked the post with a swinging free-kick and Ross Barkley hit the same upright soon afterwards with an acrobatic overhead effort.

Kante broke the deadlock in the 51st minute when his darting run into the Palace penalty area was spotted by defender David Luiz who fed the France World Cup winner to score from close range.

Palace substitute Connor Wickham spurned the hosts' best chance of the game when he toe-punted a shot over the bar in the dying minutes.

Chelsea remain in fourth place in the Premier League, one point behind Manchester City -- who were playing later on Sunday -- and two points adrift of second-placed Tottenham Hotspur, but 11 behind leaders Liverpool. Crystal Palace remain in 14th spot.

The win also gave Chelsea an important five-point cushion over Arsenal, their nearest challengers for the fourth Champions League spot who were hammered 5-1 by Liverpool on Saturday.

"It is never easy to play here or control it here especially when they (Palace) play long balls but we did well. We could have scored early but they also did a great match defensively which is why it was so difficult," Chelsea's Luiz told reporters.

Chelsea forward Olivier Giroud had two goals ruled out for offside and then was forced off injured.

Coach Maurizio Sarri said the Frenchman had an ankle problem which looked set to rule him out of Wednesday's game against Southampton and adds to the team's fitness problems, particularly in attack with Pedro, Cesc Fabregas and Ruben Loftus Cheek also currently sidelined.

"We played against a dangerous opponent so we had to have possession, we played well in the first 45 minutes and even better in the second half, the only thing I didn't like is that we didn't kill the match off," added the Italian.

"That meant it was hard to defend the match in the box in the final minutes."