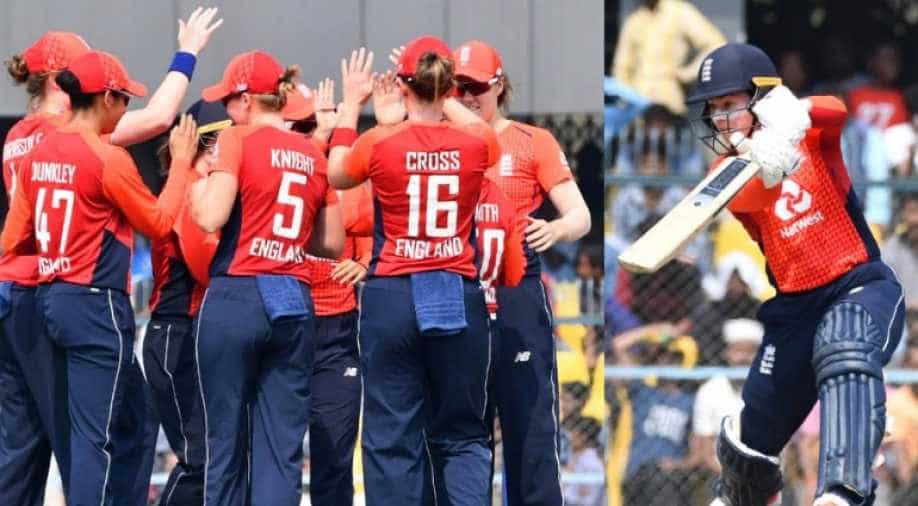 England's Kate Cross bowled a match-winning final over to help her side sweep the T20I series 3-0. (@ICC). Photograph:( Twitter )

Chasing England's modest 119 for six, the Indians had only themselves to blame as they were on course to register a consolation win after having lost the first two matches.

India snatched defeat from the jaws of victory as England beat the hosts by one run in the third and final women's Twenty20 International, completing a series whitewash here Saturday.

Chasing England's modest 119 for six, the Indians had only themselves to blame as they were on course to register a consolation win after having lost the first two matches.

India needed just three runs from the final over with veteran Mithali Raj well set at the crease on 30 off 32 balls, but the ODI skipper was left stranded at the other end and didn't get an opportunity to face a single delivery in the final over of Kate Cross (2/18).

Bharati Fulmali (5 off 13) was guilty of wasting the opening three deliveries of the final over before handing Cross her first wicket, a straight forward catch to Anya Shrubsole at mid-off while trying to clear the in-field.

It was an insensible display of batting from the Indian lower-order as new batswoman Anuja Patil too try to go for a big shot in the next delivery instead of giving the strike back to Mithali, in the process getting brilliantly stumped by Amy Jones.

From three off six balls, the equation became three off one for India and Shikha Pandey could only steal a single even as Mitahli helplessly watched the drama unfold from the other end.

Besides Mithali, skipper Smriti Mandhana smashed a quickfire 58 off 39 balls at the top to keep India one step ahead in the chase.

While Mandhana decorated her innings with eight boundaries and one six, Mithali's unbeaten knock was laced with four hits to the fence.

With the series already in their pocket, England women earlier posted a modest 119 for six from their 20 overs after electing to bat.

Tammy Beaumont (29) and Danielle Wyatt (24) got England off to a flying start, stitching 51 runs for the opening stand.

Besides the duo, wicket-keeper Amy Jones made a 21-ball 26.

India lost the first T20 by 41 runs before suffering a five-wicket defeat in the second match to hand England the series.