'I went by him and gave him a hug': Andre Russell on taking AB de Villiers' wicket with stunning yorker in IPL 2021 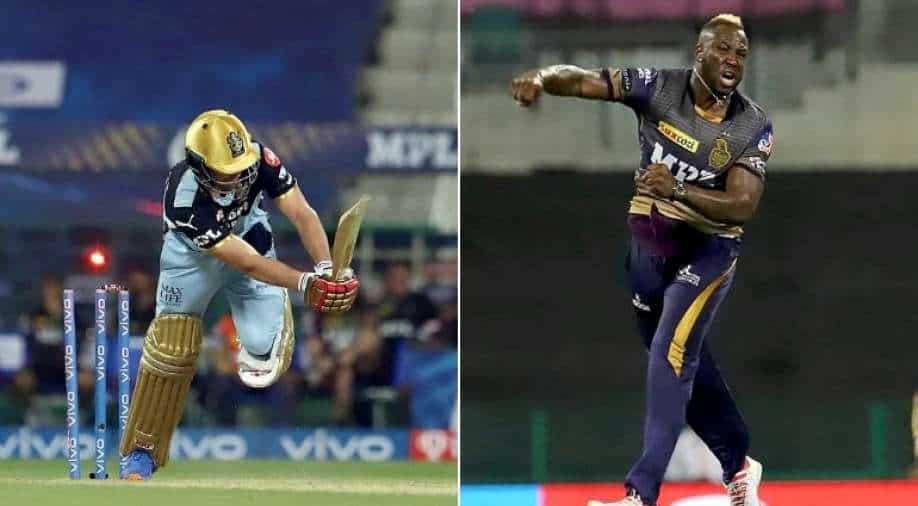 Reacting to the stunning yorker, Russell said during a virtual chat session posted by the official social media handles of KKR that he "planned it".

KKR opener Shubman Gill top-scored with a knock of 48 runs as the team chased down the small target of 93 runs with nine wickets in hand and 60 balls to spare.

During the match, RCB's batsman AB de Villiers set an unwanted record as Andre Russell bowled him on a golden duck with a toe-crushing yorker. It was the sixth time that de Villiers had got out for a golden duck in the IPL.

It was also the 10th time that de Villiers got a duck in the IPL and he is fifth among the current lot of players in IPL to have got out for zero, 10 or more times.

Reacting to the stunning yorker, Russell said during a virtual chat session posted by the official social media handles of KKR that he "planned it".

Russell said, "That yorker? I planned it. Because, I was bowling hard-length before into the wicket, and when AB came out to bat, I know he's a smart player, and so he was definitely looking for a hard length ball.”

"I just trusted myself to get the yorker in, and it worked. So, I'm happy," he added. When Russell got to know that it was de Villiers' first golden duck since 2016, he said, "Well, I was not checking that stat, but I'm happy it was tonight."

"AB de Villiers is a top player. You know getting him out on the first ball is definitely my night," Russell said, adding that he met ABD after the match hugged him.

"After the game, I went by him and I gave him a hug and I said big man I got you tonight. It's all part of the game," Russell concluded.