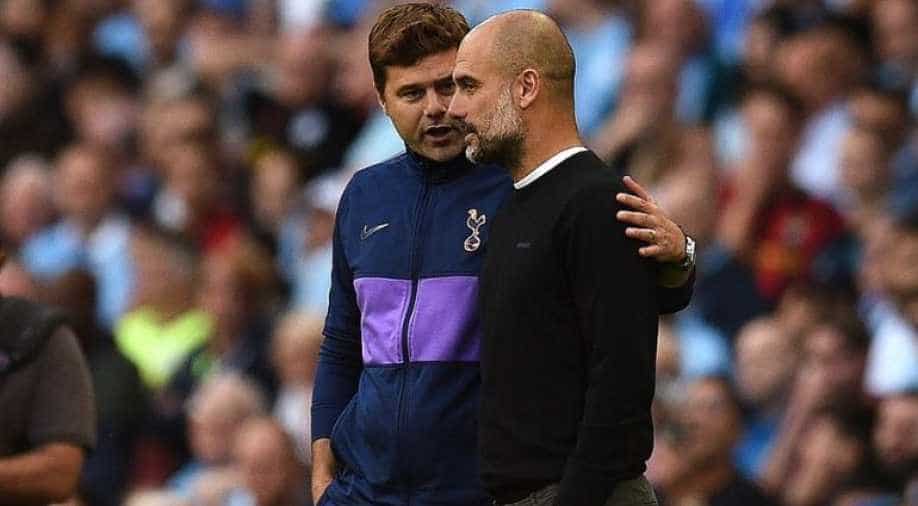 Manchester City manager Pep Guardiola bemoaned a sense of deja vu as his side saw a late winner against Tottenham ruled out by VAR for the second time in four months as Saturday's Premier League clash ended 2-2.

Spurs won a thrilling Champions League quarter-final tie between the sides on away goals in April when Raheem Sterling had an injury-time strike ruled out by VAR.

And City were denied once more when Gabriel Jesus saw a stoppage-time winner disallowed on review for a handball by Aymeric Laporte.

"Deja vu. It was the same," said Guardiola. (The) last action we score a goal, VAR disallowed it. What should I say? It's the second time, it's tough."

Guardiola was angered by the inconsistent use of the technology as City were not awarded a penalty in the first-half when Rodri was hauled to the floor by Erik Lamela.

"It was incredible it wasn't a penalty in the first-half, but VAR said it wasn't and then at the end they did."

City twice led through Sterling and Sergio Aguero, but just like in last season's European clash between the sides, the hosts were susceptible on the counter-attack and at set-pieces.

Lamela's long-range effort briefly brought Spurs level in the first-half and substitute Lucas Moura equalised with his first touch 11 minutes into the second period as Mauricio Pochettino's men scored with their only two shots on target.

A share of the points sees both sides fall two points behind Liverpool just two games into the new season, but on this evidence another shootout between City and Liverpool for the title looks likely as Tottenham struggled to cope with Guardiola's men, who had 30 shots on goal.

"Better than that I don't know if we are able to reach it," added Guardiola. "We would like to win because the guys deserve it, but football sometimes is like this."

Sterling continued his stunning early-season form by opening the scoring with a fine header from a delightful cross by Kevin de Bruyne.

City had been utterly dominant for the first quarter of the match, but were hit with a sucker punch just three minutes after going in front.

Lamela was afforded acres of space inside the City half and took advantage of poor position by Ederson to curl home an equaliser from well outside the box.

The goal briefly gave Spurs the belief Pochettino had talked of before the game that they can push City and Liverpool for a three-way title race this season.

However, that quickly evaporated as the hosts took control again thanks to another sensational De Bruyne assist as this time Aguero converted the Belgian's low cross.

But Pochettino blamed the uncertainty still surrounding the futures of Christian Eriksen, Toby Alderweireld and Jan Vertonghen before the transfer window closes across Europe for his side's inability to match City.

"Sometimes people struggle to realise we arrive here with our circumstances, we cannot fight face-to-face with them," said Pochettino.

"We have a lot of circumstances we have to fix in the last few weeks until the transfer window shuts in Europe."

De Bruyne should have had a hat-trick of assists before half-time as Ilkay Gundogan side-footed wide another inviting low cross, while Hugo Lloris saved from Oleksandr Zinchenko and Bernardo Silva to keep Tottenham in the game.

And that proved vital as Lucas ran straight on the pitch to flick home Lamela's corner with his head.

Spurs did not manage another effort on goal as City laid seige to their goal in search of a winner.

Jesus replaced Aguero, who was embroiled in an argument with Guardiola after leaving the field.

"We have a good relationship. It's the emotion of the game, he's an incredible competitor," insisted Guardiola.

The Argentine striker and his manager had reconciled any differences as they hugged each other in celebration when Jesus coolly slotted into the bottom corner in the 94th minute to seemingly win the game.

But replays showed the ball broke to the Brazilian via the arm of Laporte and City's ecstasy turned to agony again.