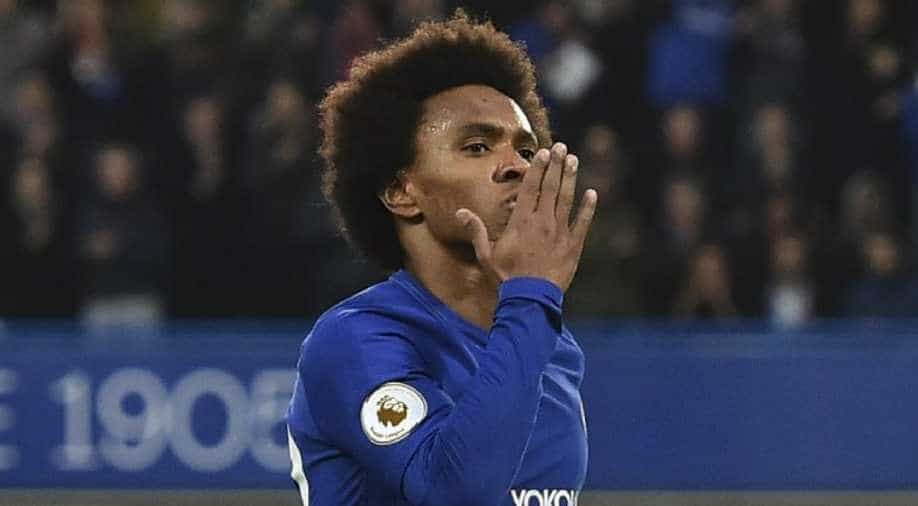 Willian inspired Chelsea's 2-1 win over Crystal Palace on Saturday as the Blues got back to winning ways ahead of their Champions League showdown with Barcelona.

After successive defeats by Manchester City and Manchester United, injury-hit Palace proved to be the ideal opponents for Antonio Conte's side at Stamford Bridge.

Willian opened the scoring in the first half and Martin Kelly's own goal doubled the champions' lead before the break.

A late goal for Palace by Patrick van Aanholt made things uncomfortable in the closing stages, but it was a valuable victory for Chelsea over a London rival who had proved troublesome in recent seasons.

Fifth-placed Chelsea are now two points behind fourth-placed Tottenham, who face Bournemouth on Sunday as the battle hots up for places in next season's Champions League.

For now, Chelsea can focus on this season's edition of the Champions League, in which they travel to Barcelona on Wednesday with the last-16 tie level at 1-1 after the first leg.

Palace had beaten Chelsea in their previous two encounters and won on their past two visits to Stamford Bridge, but they have now lost four games in succession and remain in the bottom three.

But after that, it was Chelsea, with Davide Zappacosta given the freedom of the right flank, who enjoyed the majority of possession, even if their final pass was often inaccurate and too many shots were comfortably close to Wayne Hennessey.

Willian got it right after 25 minutes. Gaining possession five yards from the left touchline, the Brazilian cut in past two covering players and shot from 25 yards with his right foot.

The ball seemed to take a fractional deflection as it sped past Kelly and Giroud and went in off the near post.

It was 2-0 seven minutes later with a goal that was as elegant in its creation as it was farcical in its final moments.

Cesc Fabregas began it with an inch-perfect pass out to Marcos Alonso on the left.

Willian dummied the wing-back's cross for Eden Hazard to collect and spread play out to Zappacosta. His angled shot hit Kelly, bounced off the head of Hennessey, back onto Kelly, and in.

Palace was reeling. Giroud's header was cleared off the goal-line and Alonso's volley was blocked.

It would have been 3-0 if James Tomkins had not anticipated Giroud's shot from Hazard's pass and dived in to block.

Roy Hodgson sent on Palace talisman Wilfried Zaha for the second half in place of Benteke, and it almost paid off instantly.

Zaha caught Zappacosta in possession and Alexander Sorloth was left with only Thibaut Courtois to beat.

The Norwegian must have thought his first goal in English football was a formality, but he hit his shot against the post.

Chelsea nearly took advantage of that let-off but Tomkins threw himself in the way of yet another goal-bound shot, this time from Willian, and Hennessey saved from Hazard.

Giroud then hit the post after 66 minutes with a first-time shot from a low cross by Alonso.

But although Chelsea continued to make most of the chances, Zaha's arrival had boosted Palace.

However, the 90th-minute goal he eventually created for Van Aanholt against his former club came too late.

The left-back's shot from Zaha's diagonal pass went almost straight through Courtois but Chelsea held on.