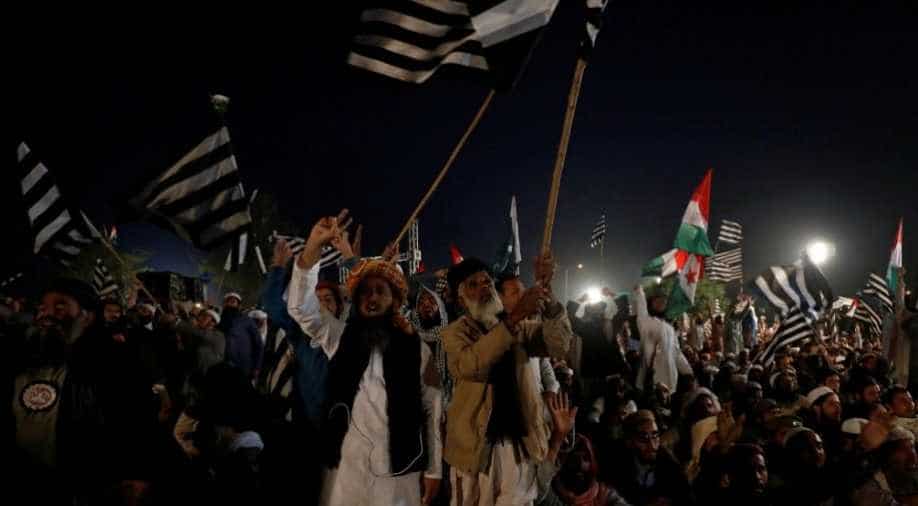 Supporters of the Jamiat Ulema-e-Islam - Fazal (JUI-F), wave flags and chant slogans as they prepare to leave for the second phase of so-called Azadi March (Freedom March), called by the opposition to protest against the government of Prime Minister Imran Khan in Islamabad, Pakistan. Photograph:( Reuters )

The protests, led by Fazl-ur-Rehman, head of the conservative Jamiat Ulema-i-Islam (F) party, began with the 'Azadi' (freedom) March on October 27 from the southern city of Karachi.

Anti-government protesters in Pakistan called off a two-week sit-in on the capital's main highway on Wednesday, but began what they called a "Plan B" aimed at crippling the country's roads and ousting Prime Minister Imran Khan.

The protests, led by Fazl-ur-Rehman, head of the conservative Jamiat Ulema-i-Islam (F) party, began with the "Azadi" (freedom) March on October 27 from the southern city of Karachi.

Thousands of protesters reached the capital Islamabad on Oct. 31, where they have been holding a sit-in demanding Khan's resignation and a fresh election, over allegations of electoral fraud and mismanagement of the economy - accusations the government denies.

On Wednesday, Rehman told supporters, who waved distinctive sticks in the black-and-white stripes of the party, to return to their home states to begin "Plan B".

"Our strength is converged here, and our associates are out on the roads, they need your help and assistance," Rehman told the crowd from the top of an articulated lorry that has served as a stage for nightly addresses to protesters.

"Your presence here has cut the roots of the government. In the next phase, we will demolish this trunk."

"The roads are already blocked with our workers but we are going to sit with them," said Qutb-ud-Din, one of the many party supporters dismantling the makeshift tent camp in Islamabad. "We are going to begin Plan B."

Rehman is a veteran politician who can mobilise significant support in religious circles across the country, especially in the southern and western states of Balochistan and Sindh.

If successful, the expansion of the sit-in could also disrupt Sindh's capital Karachi, Pakistan's most populous city and its commercial hub.

Rehman's campaign is the first concerted opposition challenge that cricket star-turned-politician Khan has faced since he won a general election last year, promising to end corruption and create jobs for the poor.

The protests come as the government is battling high inflation and a sluggish economy.

Khan ran on a platform of economic reform, but his government - like many of its predecessors - was forced to turn to the International Monetary Fund for a $6 billion bailout in July.

The opposition says Khan's government is illegitimate and is being propped up by the military, which has ruled Pakistan for about half of its history and sets security and foreign policy.