Pakistan: Over 100 clerics among 150 arrested for 'celebrating' Salman Taseer's killing 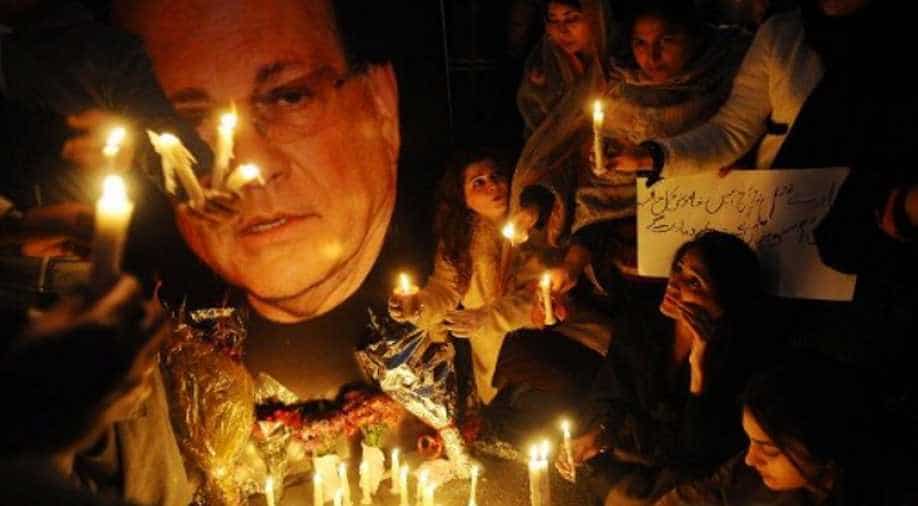 Pakistani civil society activists light candles in front of a portrait of the slain governor of Punjab, Salman Taseer during a candlelight vigil in commemoration of his life in Lahore. Photograph:( AFP )

Over 100 clerics were among 150 people arrested on Wednesday in Pakistan's Punjab province for trying to hold a rally to 'celebrate' the killing of liberal governor Salmaan Taseer in 2011 over the controversial blasphemy issue.

Protesters belonging to religious parties like Sunni Tehreek, Tehreek-i-Khatme Nabuwat and Tehreek-i-Labbaik Ya Rasool (SAW) were among those who had planned to march from Kalma Chowk to Liberty Chowk in Lahore to eulogise Taseer's killer and express support for blasphemy laws.

Taseer was killed on January 4, 2011 in Islamabad by his bodyguard Mumtaz Qadri for allegedly criticising the blasphemy laws in the country - a hugely sensitive issue in the country.

A police official said that the clerics had planned two separate rallies in Gulberg and the Mall Road areas of the city. The government banned the Gulberg protest while allowing the clerics to hold a rally on the Mall Road.

Defying government decision, hundreds of supporters of the three religious groups gathered in Gulberg for a rally but police went into action, disrupting the protest and arresting around 150 of them, over 100 of whom were clerics, local media reported.

Protesters also put up dozens of banners in Lahore and other cities declaring Qadri as a hero.

Senior police officials said no one had permission to hold a rally in Lahore. They added that the Punjab government had not allowed the demonstrators to hold any rally in Lahore and police would block routes and make arrests if necessary.

Main area and arterial roads were blocked and police personnel were heavily deployed across the city. Due to the diversions, capital of Pakistan's most populous province also witnessed severe traffic jams along certain routes.

Qadri was apparently infuriated when the governor visited a Christian woman called Aasia Bibi, who was given death sentence for alleged blasphemy, and on the occasion he termed blasphemy regulations as 'black law'.

Qadri, who was arrested and convicted of murder, was hanged in Rawalpindi's Adiala jail in 2016 and buried in Bhara Kau area of Islamabad where his supporters are constructing a shrine to honour him.

Blasphemy laws were enacted by former military ruler Ziaul Haq in 1980s and clerics have refused to allow any reforms in the laws despite concerns about their misuse.