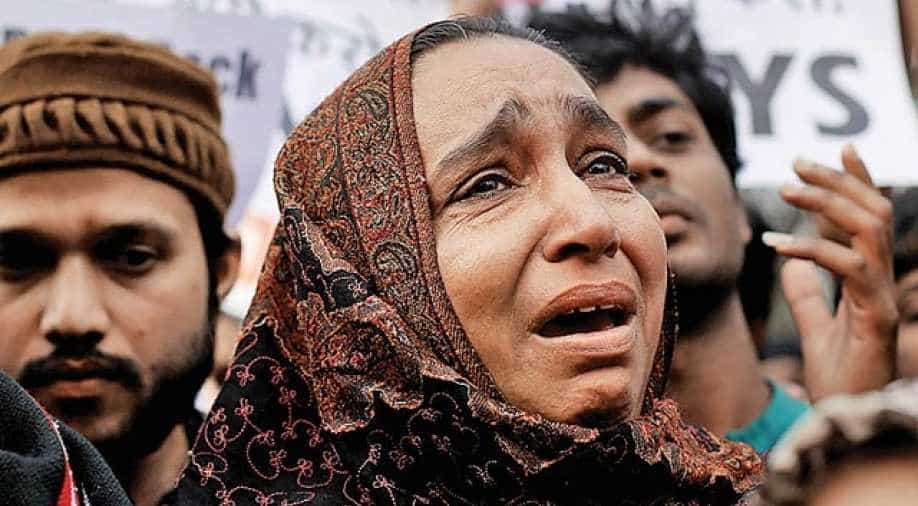 Fatima Nafees, Najeeb's mother, has been trying to reach the JNU authorities for help but to no avail, she says. Photograph:( DNA )

It's been 52 days since a student of Jawaharlal Nehru University (JNU) Delhi disappeared under mysterious circumstances. Najeeb Ahmed had reportedly had a brawl with several students of Akhil Bhartiya Vidhyarti Parishad (ABVP), an all India student organisation affiliated to the Hindu nationalist Rashtriya Swayamsevak Sangh (RSS), before he disappeared.

His family and friends have alleged that Najeeb has been kidnapped but the Delhi police so far had no luck in tracking the 27-year-old.

WION spoke to Najeeb's mother, Fatima Nafees, who resides in the north Indian state of Uttar Pradesh, about the disappearance of her son from one of the most prestigious universities in India. Here are the excerpts:

What happened on the night before Najeeb went missing?

Najeeb called me up at 2 am and told me that he was beaten up by boys from his hostel and that he was in Safdarjung hospital. When I asked him about the details of the incident, he dropped the call. I subsequently called up his roommate and asked him about the incident. He too didn’t give me much details. I told them I would be there at the hospital next morning. I immediately left my village in Uttar Pradesh and was in contact with Najeeb throughout. The last I spoke to him was at 11 am next day.

What happened at the hospital?

The hospital authorities told the boys that they will get a police report filed before beginning treatment. His friends told me that Najeeb did not want to file an FIR (first information report) against anyone as he did not want to get involved in a legal process. They also said that his assaulters had in fact filed a police case against him for starting the brawl.

This is what they have been saying, but why is the police not able to find Najeeb and hear his version of the entire episode? Let us assume that Najeeb had done it. So does it mean that they will kidnap him and keep him away from us for 52 days? Then, what is the law of the land for?

Do you think Najeeb would hit someone for this reason?

Not at all. He used to celebrate all festivals apart from the Islamic ones with his friends. Ask his friends from school and college. All of his friends are not Muslims.

What did Uttar Pradesh chief minister Akhilesh Yadav have to say?

He assured us all help. But the case is under the Delhi jurisdiction. He said a special task force had been formed to locate Najeeb.

Is the Delhi police cooperating with you?

When I went to file an FIR on day one, they insisted on us filing a missing report and not that of kidnapping. An officer said, "If you want to get back your child, do as we say." I agreed and filed a missing report. Although I wanted to mention that when I reached his hostel, I found his slippers on the stairs, clearly indicating that he was dragged away from his room.

What about the boys who assaulted Najeeb?

I remember the names of three boys - Vikrant, Ankit and Sunil. I don't understand why the police is shielding them. They are the ones who threatened to kill Najeeb and made comments like "we will send him to heaven by tomorrow morning".

The Lieutenant Governor of Delhi had said that Najeeb was seen in Bihar.
If they had seen Najeeb in Bihar, why did they not bring him back? I have met everyone by now and even written to the Prime Minister of the country about it, but there has been no response so far. I have lost hope in everyone, except God. I am sure that Najeeb is alive and safe. I am just waiting for him to come back. I don't want anyone to be punished. I will forgive all of them.

How has the student community in JNU responded?

It's only because of them that I have been able to continue the search for this long. Otherwise, I would have been shattered by now. Najeeb’s father, a carpenter by profession, is out of work too as he is a heart patient.

There were also reports in media that Najeeb was suffering from depression and was on sedatives.

All this is rubbish. They just want to divert the case. They have nothing to say, so now they are coming up with these theories. The fact that he got admission in four different universities and he choose JNU over them proves that he was mentally very sound and stable.

Najeeb was a very quiet person. He did like to talk much or mingle with a lot of people. He would seldom laugh and not speak much.

When he comes back now, I will not let him study neither would I send any of my kids to study outside. I just want him back.

Why do think Najeeb was targeted?

The fact that the red thread angle is being brought to the fore repeatedly by his assaulters proves that he was beaten because he was a Muslim. Had it been Naresh instead of Najeeb and the assaulter was a Muslim, the entire family of the assaulter would have been languishing behind bars by now.

Are you talking about an identity-based crime here?

I am not saying this. The entire country knows it. It will have a very negative impact on the minds of young Muslim students planning to move to Delhi for education. This is a threat to our very democracy.

How has the JNU administration responded?

I have been chasing them. The vice chancellor is not even ready to talk to me. They say that we are not responsible for everything that happens on the campus. I can’t understand how they could be so insensitive.

What did Najeeb want to do after graduating from JNU?

Najeeb wanted to prepare for civil services after completing his course here.