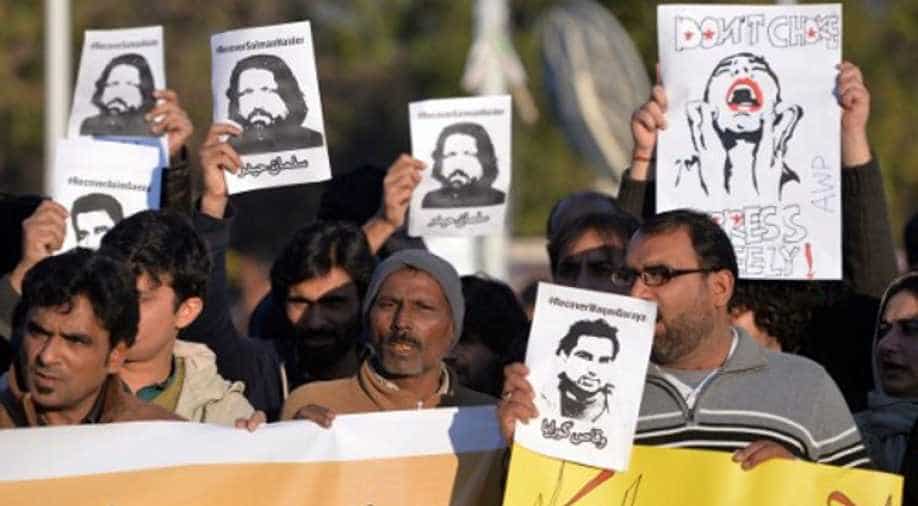 In this photograph taken on January 10, 2017, Pakistani activists hold images of the bloggers who had disappeared, during a protest in Islamabad. Photograph:( AFP )

Two Pakistani bloggers freed after vanishing earlier this month have now left the country because of safety fears following a virulent media campaign painting them as blasphemers, relatives said Monday.

They were among five men who went missing from various cities in Pakistan.

Four of the five,who had taken a stance against religious intolerance and criticised the military, have been freed, their families said.

They would not comment on where the men had been held.

Allegations on social media networks Facebook and Twitter and by right-wing TV hosts that the missing men were blasphemers have triggered a flood of threats despite denials from their worried families.

Such allegations can be fatal in deeply conservative Muslim Pakistan, where 17 people remain on death row for blasphemy.

Liaqat Ali Goraya, the father of blogger Waqas Goraya, confirmed to AFP that his son had left the country.

"Waqas has gone, we`ve sent him abroad," said his father, declining to comment on who had held him. Before he went missing, Goraya was based in the Netherlands but had returned to Pakistan for a family wedding.

A source close to the family of blogger Asim Saeed confirmed he too had left the country.

His father Ghulam Haider Akbar declined to specify his son`s whereabouts but said the family had received death threats purporting to come from the anti-Shiite Laskhar-e-Jhangvi group.

"You who have blasphemed deserve death. You are out of Islam and should be ready for a painful punishment, which will be remembered by your generations to come," a text message said, according to Akbar.

A relative of a third blogger, who asked to remain anonymous, said both he and his family had left their home town and were in hiding.

"We are going to think about it for a few days and assess the situation. If it seems OK, we`ll return, else we`ll try to go abroad," the relative said.

The whereabouts of the fifth man remains unknown. Rights groups have long criticised the colonial-era blasphemy legislation as a vehicle for personal vendettas as even unproven allegations can result in mob lynchings.

Several NGOs and observers say the online campaigns are intended to silence progressive voices and are carefully coordinated.

Pakistan has had a history of enforced disappearances over the past decade, but this has mainly been confined to conflict zones near the Afghanistan border or Balochistan province, where separatists are battling for independence.

The country is among the world's most dangerous countries for journalists. Reporting which is critical of security policies controlled by the powerful military is considered a major red flag, with reporters at times detained, beaten and even killed.

On Monday satirical news site Khabaristan Times announced it had been blocked by Pakistan's Internet regulatory authority. (The website, however, can be accessed from WION's headquarters in New Delhi.)

The site "has been blocked on complaints of objectionable content", a government source confirmed to AFP, requesting anonymity.

The site often poked fun at the military and politicians.