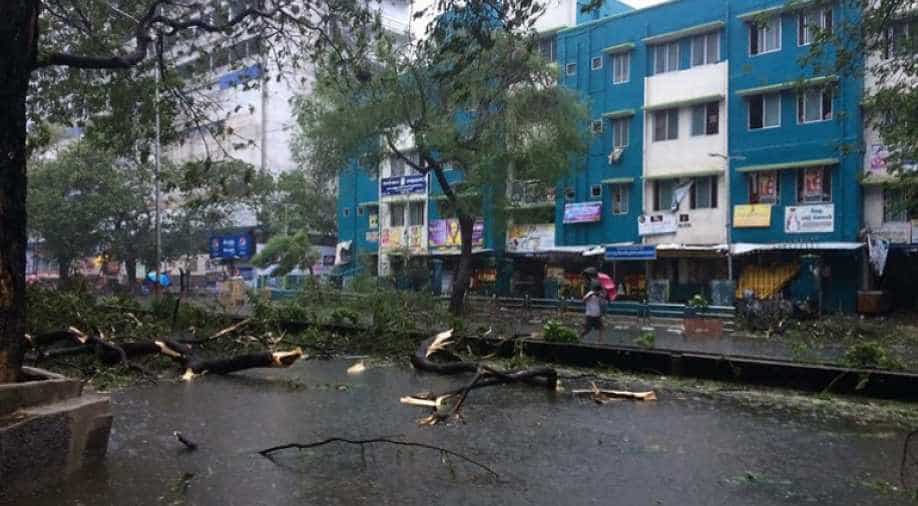 More than 10,000 people were rescued and sheltered by the National Disaster Response Force in nearly 300 relief camps after the "very severe" cyclone Vardah, the most intense to have hit Tamil Nadu in two decades, made landfall.

The National Disaster Management Authority (NDMA) stated the cyclone over north Tamil Nadu moved further west, south-west during past six hours at a speed of 20 kmph and has weakened into a depression.

The cyclone flattened homes, snapped communication lines and threw rail, road and air traffic into disarray as it crossed the coast near the Tamil Nadu capital and pounded Chennai, Tiruvallur and Kanchipuram with rain.

Human loss 10(4 in Chennai, 2 in Kancheepuram, 2 in Tiruvallur, 1 in Villupuram and 1 in Nagapattinam).

Ten people died. The Tamil Nadu government announced a solatium of Rs 4 lakh each for their families.

Flights resumed at Tirupati Airport after it was briefly shut down.

The National Disaster Management Authority said that a total of 10,432 people were rescued by 19 NDRF teams in different parts of Tamil Nadu.

As many as 296 relief camps were set up of which 97 have become operational, the NDMA said in a statement.

Altogether 11,857 food packets were also distributed by the NDRF. As many as 297 roads were blocked in Tamil Nadu after the cyclone's landfall of which 89 have been cleared so far.

A total of 4,200 trees fell and 30 electric transformers were also damaged. The NDMA said the cyclone will slow down by midnight and weaken by Tuesday.

However, it asked people in cyclone-hit areas to remain indoors and not to venture out besides remaining calm. One NDRF team comprises of 35 personnel.

The Southern Railway said the cyclone had caused a severe impact to its infrastructure and prompted cancellation, diversion and suspension of rail services.

"The intensity of the cyclone has had a severe impact on the infrastructure of Chennai Division, resulting in considerable damage. Overhead electrical lines have been damaged at several locations," Anupam Sharma, Divisional Railway Manager, Southern Railway said.

"As a result of disruption of overhead electrical lines, 16 trains have been held up in Jolarpettai Chennai Central section and four trains in Villupuram Chennai Egmore section.

Several Chennai-bound trains have been regulated at various stations of Chennai division, he said.

Although all efforts were being made to restore normalcy as early as possible, full assessment for restoration work was possible only after the cyclone has finally ebbed away, he added.

Urgent steps were being taken to ensure movement of all Mail/Express trains which were held up mid-section. Passengers of all such trains were given maximum facilities so as to obviate the hardships to the extent possible, Sharma said.

Operations at Chennai airport were suspended for the entire night, with nearly 170 services being disrupted through the day even as 10 flights were cancelled.

A total of 44 international and 123 domestic services were affected as they were diverted to nearby airports like Bengaluru even as many stranded passengers were still waiting at domestic and international terminals. Steps were being taken to distribute food to them, they said. Departing flights to cities including Delhi, Mumbai and Bengaluru were cancelled.

Meanwhile, though no major loss of life or property has been reported from Andhra Pradesh so far, heavy rains lashed Chittoor and SPS Nellore district, affecting normal life. A report from Amravati said as many as 18 fishermen from Tamil Nadu, who strayed into the Bay of Bengal yesterday despite warnings, were rescued from near the Sriharikota high altitude range in afternoon.

Chief minister N Chandrababu Naidu announced on Monday that Andhra Pradesh was ready to extend all necessary help to neighbouring Tamil Nadu that bore the brunt of 'Vardah'. With the forecast of heavy rains for the next 24 hours in Nellore, Chittoor, Prakasam and Anantapuramu districts, the official machinery has been asked to remain on alert, mostly to prevent breach of tanks. Over 9,400 people living along the Bay of Bengal were evacuated to relief camps amid heavy rain.

Indian home minister Rajnath Singh spoke to chief ministers of Tamil Nadu and Andhra Pradesh to take stock of the situation in the two states and promised all help.